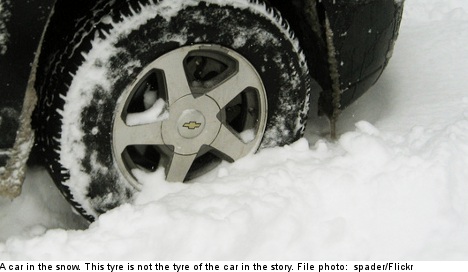 A woman in Skellefteå needed to be rescued from her car after skidding into a ditch in the early hours of Wednesday morning due to the September snow. Rescue services were quickly on the scene and the woman was taken to hospital with minor injuries.

“The car had summer tyres which may have contributed to the accident. It is starting to be the time to switch over to winter tyres,” Michael Liljenberg of the Västerbotten police told the Expressen newspaper.

The Swedish weather agency (SMHI) has already said that freezing conditions during the nights are set to greet several parts of the country in the coming days.

In Hagshult, southern Sweden, temperatures of -5C were recorded overnight. Similar temperatures are expected for many of the coastline regions in the south with weather experts saying it is quite unusual for this time of year.

Stockholmers will also be affected by the cold snap with temperatures set to drop to 2C during the day and below freezing at night time.

While the summer is most definitely over, weather experts have said the mercury will climb next week.

“In the middle of next week there will be a period of high pressure with warmer air giving temperatures of 15 degrees in the south and 10 in the north,” SVT meteorologist Joel Mellin said.

Motorists in the colder regions of the country have been told to be aware of potential black ice patches and be extra careful when on the road.