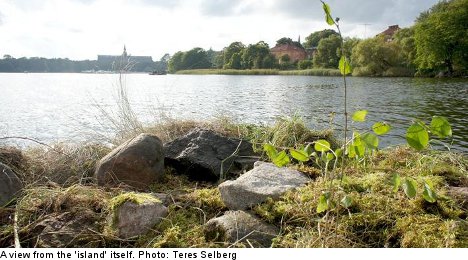 “I was not prepared for this. I didn’t have a clue that there would be so many who would actually take their time, write and ask about things like building permits,” Selberg told The Local.

Selberg’s surprise at the attention is due to the fact that the island is not really an island at all, but a floating vessel dressed up to look like any other piece of land.

“The main idea was the addition of a new island, and the more simple it became, the better. I wanted to make it look just like a piece of the surrounding nature,” she said.

IN PICTURES: See the island up close

She explained that the idea of building an island had interested her for some time and began to take shape last summer.

“I was doing a lot of drawings on these ideas last summer, planning to stay on the island the entire summer, but making the island travel, like a slow boat to see different places.”

The floating piece of shrubbery measures just eight square metres – barely enough for a bed let alone a dwelling in which to house it. But what with property prices sky high in Stockholm, the response to the advert appears to be proof that (almost) anything goes.

Despite the floating “island’s” modest potential as a seaside holiday home, Selberg maintained that it is still worth the investment, if only for its artistic merits.

“I do of course believe that this is very important art. It raises a lot of questions about the age in which we are living. Not only thoughts about the public space, but also how far we are can go just to own things,” she said.

Stockholm’s rental market, plagued by decade-long waits for rent-controlled apartments, has become a notorious and tiring fact of life for many residents and with apartment construction unable to keep up, Selberg argues that alternative solutions are needed.

“Maybe it is time to start building more interesting different kinds of living spaces in Stockholm, so that people do not have to make their home on eight square metres under open sky to have an alternative home,” she said.