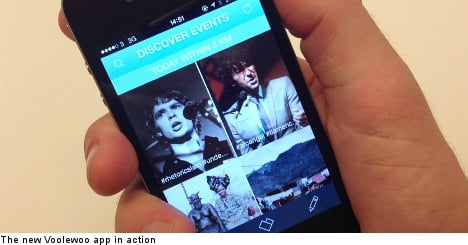 “If you want to know what to do tonight, tomorrow, or this weekend, you’re going to have a problem,” co-founder Tommy Sollén told The Local.

“It’s not easy. How are you gonna do it? You can surf around online, or maybe you have cool friends on Facebook, but even so – it’s a problem.”

With the express aim of solving this exact problem, two French men and one Swede founded Voolewoo in early 2012. Since then, the app has been in stealth start-up mode, growing organically and financed only by the co-founders.

The app works somewhat similar to posters or flyers pasted across a city. Users can learn which events are coming up in their neighbourhood and then simply “grab” those that are most appealing to them.

“Grabbing is our version of ‘liking’ something,” Sollén explained. “It’s just like a flyer, you can simply grab it, and its yours.”

The focus is on music, art, fashion, and outdoor events like festivals, and everything is in English. As well as finding out what’s happening nearby, users can also upload their own events in seconds.

“We wanted to make it all easily accessible and available on the go, both to use and share,” Sollén said. “And why limit yourselves to just your friends anyway. Facebook puts a wall on your network, for example, it’s only your friends. Here, just like with Twitter, Instagram, and Pinterest – Voolewoo is completely open to everyone.”

Cedric Menard, a Parisian native and the company CEO and co-founder, thinks the app is the kind of thing an ever-shrinking Europe needs.

“This is simple and innovative, everyone gets it. At a European level there is only going to be more of this kind of thing. People are flying all over the place nowadays, and they need an easy way to find out what’s going on,” he told The Local.

“The beauty of the app is that people can connect with their own tribes, travelling abroad and inside the country, gathering and meeting with people based on events.”

The third co-founder, Paul Medrano, was the brainchild of the app, and believes sharing local knowledge is the key to a good social life.

“The internet today is more social than ever but are we as human beings also more social? I’m afraid not. This idea belongs to the users and lets them have the power. Ideally, it will spread, but for now we’re starting small in Stockholm,” he tells The Local.

“If we can help people here, we’d love to go further. This is a chance to see something different, not just ‘grabbing’ the obvious things thrown in front of us. It will be exciting to see how it goes.”