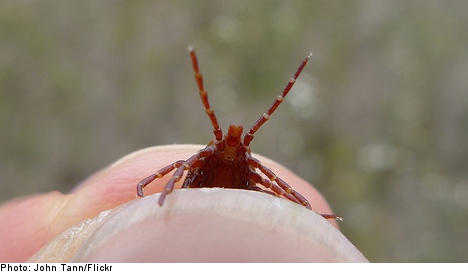 “We found three cases in 2009. Now we have almost 50 patients where we have noticed meat allergy is connected to tick bites,” Maria Starkhammar at Stockholm’s Södersjukhuset Hospital told the Dagens Nyheter newspaper.

Almost half of those patients have also been hit by anaphylaxis – an allergic reaction that brings on symptoms such as rashes, swelling of the throat, low blood pressure, and can even lead to death.

The allergic reaction stems from an antibody in ticks that can be passed to humans when they are bitten.

“We have been able to show that the alpha-gal carbohydrate exists in the tick’s digestive tract. This discovery has meant that we can say with certainty that there is a connection between the tick bite and meat allergy,” explained Marianne van Hage, professor in Clinical Immunology at the Karolinska Institute.

Sufferers have found it hard to draw their own conclusions as reaction time is slow.

“I ate bolognese sauce and had a strong allergic reaction about six hours later,” Mia Lindström, one of the patients in the study, told the paper.

“This was the first step in determining that I had an allergy to meat. I’d known about it before but never had such a strong reaction before. I am the only one in the family who gets tick bites and I’ve had several,” she said, adding that she has completely struck all red meat our of her diet now.

Doctor Starkhammar added that the diagnosis is hard to make, as the reaction can be delayed, and as meat is often something the patients have eaten their whole life.

Ticks, or fästingar in Swedish, can cause Lyme disease and TBE – tick borne encephalitis – a viral infectious disease involving the central nervous system.