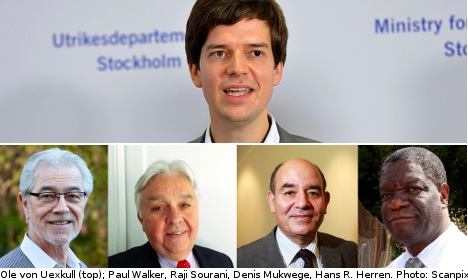 “Chemical weapons are easy to manufacture but very difficult to get rid of. Walker has 20 years of experience in how to eliminate them both politically and technically,” Ole von Uexkull, director of the Right Livelihood Award Foundation, told AFP.

“It is his knowledge that is needed right now in Syria.”

Walker, from the environmental group Green Cross, shares the prize with three other activists who the prize jury said work to “secure the fundamentals of human life”.

mass destruction, to secure respect for human rights, to end the war on women

in Eastern Congo, and to feed the world with organic agriculture,” wrote von Uexkull in a statement.

For this reason, the Right Livelihood Award Foundation oftens calls its distinction the “alternative Nobel prize.”

The awards were to be formally handed over at a ceremony in the Swedish parliament on December 2nd 2013.