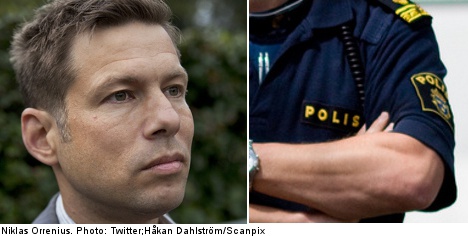 “Many are scared and worried. Many think of Hitler, which I have noted that a great deal of opinion-makers consider to be tastless. But the Roma were a part of the Nazi genocide, just like the Jews, although this is less known,” Orrenius said in a chat with Dagens Nyheter readers on Wednesday.

Malmö resident Niklas Orrenius, 39, made his name in the Swedish media for his reports on the Sweden Democrats in the 2000s, which culminated in his book ‘Jag är inte rabiat, jag äter pizza’ (literally: ‘I am not a fanatic, I eat pizza’).

Since his move from local daily Sydsvenska Dagbladet to Stockholm broadsheet Dagens Nyheter (via tabloid Expressen), Orrenius has continued to tackle issues of migration, discrimination, racism, religion and the multicultural society. Monday’s revelation that the police in Skåne in southern Sweden maintained a registry of Roma is the latest step in his widely acclaimed work which was rewarded in 2012 with the prestigious Golden Pen (Guldpennan).

The original article was followed up with a series of supplementary revelations which have ensured that Orrenius, and Sweden’s Roma, have dominated the Swedish press discourse for the duration of the week.

The articles have furthermore prompted heated exchanges between senior police officers, condemnation from Justice Minister Beatrice Ask and the Council of Europe and enormous interest from readers. Ask has argued that while profiling is a common and accepted part of police intelligence work, there are rules which prevent classifying people purely on ethnic grounds, a view shared by Orrenius in response to a reader question on Thursday.

“A corner stone of a modern state based on the rule of law is that we do not believe in original sin. It’s hard for me to find a sensible reason to register more than one thousand children who all are Roma,” he said.

The revelations have shaken the Swedish police, have prompted the launch of an internal investigation and grabbed headlines across the world. Not all of the reactions have been positive, however, and Orrenius conceded that there would no doubt be some police officers across Sweden who are angry with him.

“But I have received a lot of emails from police officers who are ashamed of what we have revealed… You can’t put everyone in the same box – not police, not Roma. I am personally disturbed by the ‘police hate’ which is occasionally aired.”

Orrenius added that there was however one former police officer whose support he has been able to count on.

“My mum was a police officer. She is not angry with me.”