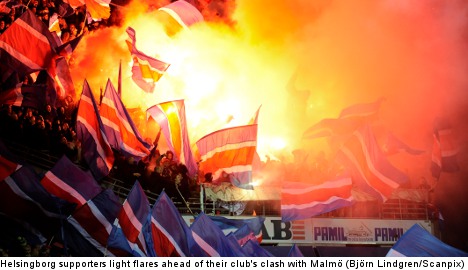 The two sets of fans had packed into the Helsingborg train station following the match on Wednesday evening which Malmö FF won 3-0. With tensions rising, combined with a heavy police presence, it was about to get ugly until the escalator mysteriously got faster and separated the fans who in turn went flying.

At first it was assumed that a member of staff had pressed the speed up button and angry fans demanded to know on Facebook who the culprit was.

It later emerged that the escalator gave way due to the increased weight generated by the hordes of supporters. A spokeswoman for the Swedish Transport Administration (Trafikverket) said the supporters were given the speedy lesson in crowd control due to a brake failure caused by overloading.

Conspiracies of a rogue individual pressing special speed buttons were given short shrift by Linda Carlén of the Swedish Transport Administration.

“The only thing that can be altered from the outside is to turn on the stairs to normal speed after somebody has pressed the emergency stop button,” she told SVT, adding that no one was injured in the accident.

In the wake of the accident Trafikverket has decided to switch off and lock the escalators in train stations where high-risk matches are being played.

Malmö FF and Helsingborg IF have a fierce local rivalry and a trouble is common at their matches. Last year The Local reported on the last match between the sides to be played in Helsingborg where a Malmö player was subjected to a death threat.