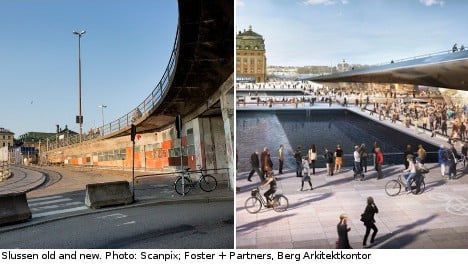 "Finally. After 20 years of discussions and investigations," city planning commissioner Regina Kevius said after the ruling on Friday.

"In principle, the Environmental Court is the last instance, but there is an opportunity to (appeal to) the Supreme Court. This would require that any Supreme Court ruling would be a precedent, and we have concluded that this is not the case," appeals court judge Per-Anders Broqvist told journalists.

The court has assessed a long list of objections to the redevelopment of Slussen, whose cloverleaf design was completed in the 1930s. The project was praised by, among others, French architect Le Corbusier.

Its defenders have argued that its formation rendered it a unique historic engineering solution and have demanded that the current Slussen should be retained and repaired. Its opponents meanwhile have argued that it is unsightly, unsafe and fails to perform its function as a traffic solution.

IN PICTURES: See the new Slussen design, and check out its colourful history

The process to redevelop Slussen began with discussions as far back as the 1970s and Friday's court decision means that construction can now finally begin in the summer.

The new design for Slussen includes a road bridge between Södermalm and Gamla Stan, a new bus terminal and new office and retail properties. The redevelopment is budgeted to cost 8 billion kronor ($1.25 billion).