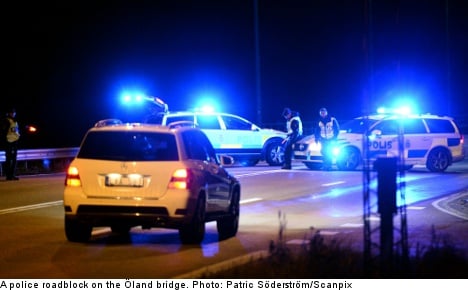 Two people were found dead in a fire-ravaged holiday home on the island of Dalarö in Stockholm’s archipelago on Sunday morning in what police suspect was an arson attack or a double murder.

An arrest warrant has been issued for the man suspected of setting the fatal fire and who is believed to be on the Baltic island of Öland off the south-eastern coast of Sweden.

On Sunday night, police cordoned off the bridge that connects Öland to the Swedish mainland and placed spikes on the roadway.

Police in Kalmar Councy in southern Sweden searched the island throughout the night on Sunday and into Monday with the help of SWAT teams from Stockholm and Malmö.

According to Swedish media reports, the two victims were children, although police remain tight-lipped about the incident and refuse to comment on the investigation.

Early on Monday morning the roadblocks at the Öland bridge were removed.

“We suspect he’s out there, somewhere on the south of the island. He might be in a house or out in the wilderness.”

Police helicopters are expected to join the search on Monday morning.

The fire was first reported around 2.30am on Sunday and the house was engulfed in flames when emergency services arrived. Two bodies were found inside.

According to the Aftonbladet newspaper, the two victims were children, while a third child managed to escape from the home and alert authorities about the fire. Police, however, refuse to confirm the report.

The holiday home has been rented by a man for the last two and half years and was located on a lot that includes a larger house.

“He’s been here about every other weekend, when he had his children,” the property owner told TT.

However, the property owner, who wasn’t home at the time of the fire, refused to release any more details about the man.