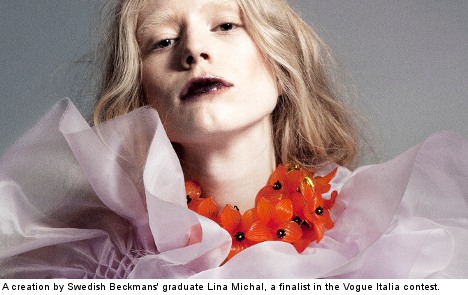 “I’m still ecstatic. My heart rate shot up when I heard I was a finalist, and it hasn’t gone down since,” Lina Michal, who submitted her Beckmans graduate collection to the contest, told The Local.

Some 400 entries were handpicked to allow the magazine’s readers to vote for their favourites online. From a shortlist of 60 designers, Michal’s ethereal creations went on to catch the eye of Senior Fashion Editor Sara Maino who made the final selection of ten designers.

“It’s better to be courageous rather than boring,” Michal summed up her appreciation of the fashion tome, which is known as one of the less staid editions of Vogue magazine, which is published in national editions across the world.

The final decision is now in the hands of Vogue Italia’s readers, as the ten finalists have had their work published online for public scrutiny.

A hat made of lilac blossoms and swaying cuts in sheer fabrics put Michal’s design apart from the array of designers competing for a final nod of approval of fashionistas online.

“I was inspired by Sweden’s long history of animism, and also illustrations by (Swedish children’s book illustrator) Elsa Beskow,” Michal said, adding that she was up against stiff competition from the other finalists.

“Many of the other finalists work with almost architectonic lines, it’s borderline sculptural, while my designs are the direct opposite – organic and spontaneous,” she explained.

The final decision will be published on October 5th. While a nod from Vogue Italia won’t go unnoticed by the fashion industry, the prize also includes help in producing a commercial collection based on the winning designs from Danish firm Muuse.

Who is Michal’s would-be client?

“Someone independent and original,” she said. “Or at least that is who I’d like to buy my designs.”