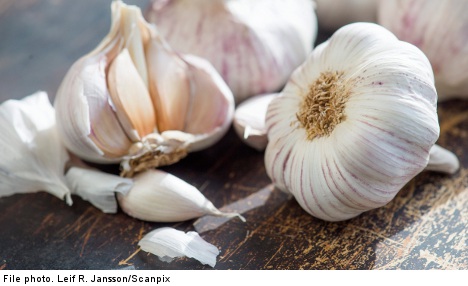 “The effects of garlic are particularly interesting, but it’s too early to change dietary recommendations for pregnant women. We need to study it further,” said professor Bo Jacobsson in a statement on Wednesday.

The researchers at Gothenburg’s Sahlgrenska University Hospital found that eating food laced with garlic in the early stages of pregnancy brought down the risk of premature birth by a full 30 percent.

They quizzed almost 20,000 pregnant women about their dietary habits, and found that about 4 percent of pregnancies end in premature births.

While garlic early appeared to have a positive effect on reaching full-term, so did eating dried fruit such as raisins towards the end of the pregnancy.

“We have seen previous studies about how women’s diets affect the gestation length,” Jacobsson said. “Now we can go on and test our hypothesis that certain foods can prevent premature birth, by studying the underlying processes.”

An article presenting the team’s findings, entitled Intakes of Garlic and Dried Fruits Are Associated with Lower Risk of Spontaneous Preterm Delivery, was recently published in The Journal of Nutrition.