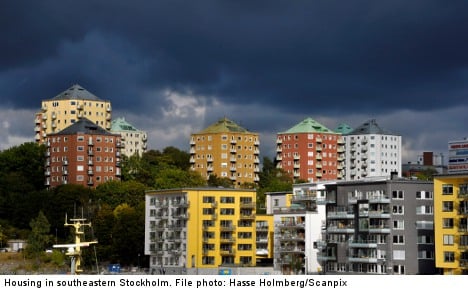 The news comes after a detailed analysis of the ages of people who obtained first-hand rental contracts in Stockholm in 2012, carried out by the Svenska Dagbladet (SvD) newspaper.

Of the 3,940 rental contracts drawn up over the year, just 40 tenants who managed to find an apartment through the housing queue were under the age of 25 – and none of these apartments were in the city centre.

Those 40 youngsters were among almost 90,000 people under the age of 25 who are waiting on the housing list (bostadskö) for a first-hand lease in Stockholm. To put the figure in perspective, there are just over 59,000 people now living in Stockholm between the age of 20 and 24.

“We knew about these statistics and we're not surprised. But we think it's horrible that the situation is so extreme,” Irma Ortega, operational manager at housing advocacy organization Jagvillhabostad.nu ('I want a home now'), told The Local.

“The main problem is that they're not building cheap housing that young people can afford. We have a huge shortage, and very little is being done to solve it.”

While Ortega says it's not impossible for young people to find a living arrangement in the Swedish capital, she claims that there is a lot of work involved.

“Because of the queue system, there can be a wait of many years, and the landlords put really high demands on renters, such as having a steady job with a sufficiently high wage. And if you're 25, this is something you probably don't have,” she explained.

“We think that the solution is to build more apartments, we want owners at the municipality level to take charge and not only let the big construction companies always win the land allocation. They should allow more construction on the land so there is more variety for house hunters,” Ortega said.

With many foreigners in Sweden unlikely to be on the housing queue, she advised those who arrive from abroad to rectify the situation immediately.

“If you're planning to stay in Sweden, I'd recommend you sign up for the queue, then I'd suggest you spread the word to your network that you're house hunting. Maybe then write a personal letter to private landlords,” she told The Local.

“It's not impossible but it takes a lot of work.”