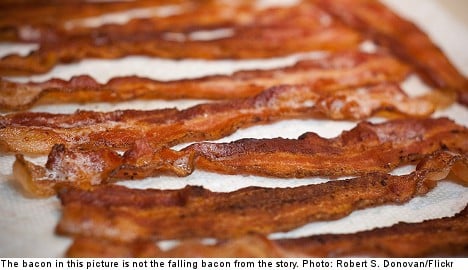 The incident took place around 7am in the meatpacking area of Gothenburg’s historic Gamlestaden district.

A man who works in a warehouse in the area found himself underneath 500 to 600 kilogrammes of bacon after a trolley carrying packages of the thinly-sliced pork toppled over.

“I don’t know exactly how it happened, but somehow the trolley fell over. I’ve never heard of anything like this,” police spokesman Peter Adlersson told The Local.

The man was conscious when he was rushed to Sahlgrenska University Hospital with unspecified injuries following the mishap. But according to Adlersson, doctors later declared that the man had escaped the incident relatively unscathed.

“We’ve learned that he sustained minor back injuries as a result of the accident,” he said.

Police have since filed a workplace accident report about the bacon bungle which will be reviewed by the Swedish Work Environment Authority (Arbetsmiljöverket).

“They are the ones who will ultimately decide whether or not to launch a formal investigation,” Adlersson explained.