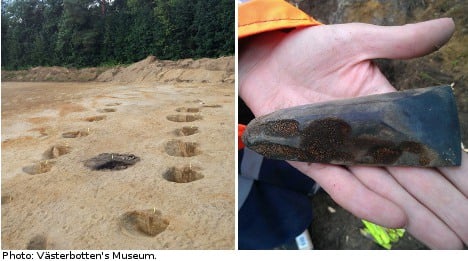 “It is completely unique,” Jan Heinerud at Västerbotten’s Museum in Umeå told The Local on Friday. “We have never previously found a long house like this so far north.”

The farm was discovered in the area between Backen and Klabböle in an area known as Klockaråkern and it is thought that the farm was in use for almost 600 years from around 1100 BC.

Heinerud said that the museum’s experts have been unable to establish exactly who would have lived at the location, but that they have a number of theories.

“There were hunters and fishermen in the area at that time. My colleagues and I at the museum think that they may have come up from the south,” he told The Local.

Heinerud explained that the find changes the history of the region around Norrland’s main city of Umeå and raises further interesting questions over how the area was used between 500 BC and 500 AD, of which little is known.

“With more research perhaps we can fill in this gap and the picture may change,” he said.

The farm is thought to have contained a main residence in the form of a long house in which the farmer would have lived together with the animals, as as well a series of other smaller buildings.

The team from the Västerbotten Museum is digging at four locations, two on either side of the river, and will do so at least until the first snow arrives.