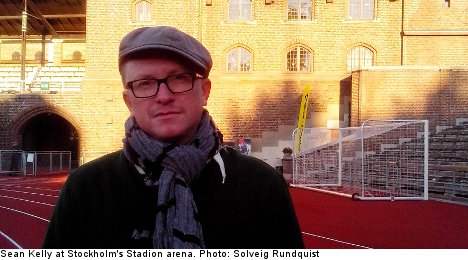 “I’ve been thinking about what’s been happening in Russia. It’s getting worse and worse by the day. When I got the news about them seizing the children of gay parents, I just thought, it’s making me crazy. But I’m just one person and Russia is the biggest country in the world. What can I do?” Sean Kelly told The Local.

Kelly decided to act and on Sunday October 6th, over 2,000 people will gather in the Olympic Stadium in Stockholm, not for a sports event, but to sing the Russian national anthem.

The event will be joined by musicians and citizens from around the world under the “Live and Let Love” video project which is intended to let the Russian lesbian and gay (LGBT) community know that they are not alone.

“Being a musician is a very international profession, so I know a lot of other musicians. And every time I called someone they said, ‘Oh, wow’, and got right onboard,” he said.

With the Winter Olympics set to be held in Sochi in southern Russia in February 2014, the choice of Stockholm Olympic Stadium, the venue for the 1912 summer games, was an obvious one after he decided that initial plans to host the event in Berlin proved too difficult.

“I called and asked if we could use the stadium, and when they heard what I was planning they joined right away, and said of course we could be there.”

The “Live and Let Love” video will open with a young girl in a rainbow sweater singing the Russian anthem in the empty stadium. A young boy’s voice will join in, followed by a violin, soprano, and then the voices of 2,000 choir singers and any other Stockholmers who choose to participate. As the song progresses rainbow-coloured flags will be raised throughout the stadium.

“You’re actually only allowed to raise the Swedish flag at the Olympic Stadium [in Stockholm],” Kelly informed The Local, “but they made an exception for this.”

The video footage from Stockholm will be cut together with footage of other musicians and singers from around the world, all singing the Russian anthem and waving rainbow flags. Artists involved include pop group Alcazar, the Dalhalla Opera, a jazz band from California, award-winning international choir Voces Nordicae, and a South African choir.

“I want it to be like the whole world is raising their voices to tell the Russian government they’re doing something wrong.”

The video will be released about a month before the Sochi games. While Kelly hopes the video will go viral and be picked up by large news networks, he said the goal of the project isn’t to alter the Russian government’s policies, but rather to let the Russian LGBT community that they’re not alone.

“The Russian government is just going to say, ‘Fuck you’ to me,” Kelly said. “(But) if one person in Russia thinks, ‘I can’t fight for my rights, but other people in the world are fighting for me,’ then we’ve changed the world a little bit.”

Russia has caught the attention of global media in recent months for its stringent policies against homosexuals, including laws against wearing rainbow colours and portraying homosexual relationships in schools.

A Russian law passed in June has been interpreted by some critics to give police the right to seize the children of homosexual parents. It also emerged on Friday that Russia has halted child adoptions to Sweden, citing the country’s gay marriage law.

Kelly isn’t the first Swede to have protested Russia’s anti-gay policies – in August several Swedish athletes painted their nails in rainbow colours at the World Athletics Championships in Moscow.