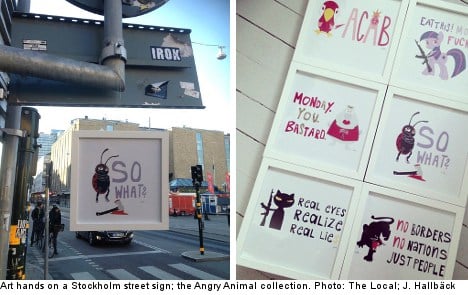 Under the cover of darkness, graphic designer and artist Jessica Hallbäck, 32, took to the streets of Stockholm on Thursday night armed with half a dozen framed images of her own creation, as well a piece produced by another artist friend.

The modest-sized Ikea frames featured illustrations of animals with an attitude, captioned with an assortment of messages meant to provoke.

“I’ve had the idea in my head for almost two years,” Hallbäck told The Local of her “Angry Animals” series, which she emphasized had nothing to do with the popular Angry Birds computer game.

“I realized that it’s much easier when controversial things are said by animals rather than humans. At first, the animals were just plain angry, but later I started adding more political messages to my drawings.”

Hallbäck placed the pieces of art in various locations around Stockholm with the aim of offering residents the chance to own a piece of original artwork without having to pay exorbitant prices.

She chose to put the angry art out this week to coincide with the Affordable Art Fair that opened in Stockholm on Thursday and features original work from over 70 artists with no pieces priced at more than 45,000 kronor ($7,025).

“The art world is too elite and closed off from the general public. I wanted to do a street art exhibition for regular people. I guess it was sort of a protest action against an art world that is too overpriced and exclusive.”

Each of her drawings included a hand-written note on the back telling whoever found it “The picture is yours”.

As of Friday afternoon, Hallbäck had learned that three of the seven pieces had been “found new owners”.

“It may be that some people who find the art are too scared to actually take it. Of course, the longer they are left hanging in public, the more people will get to see them,” she said.