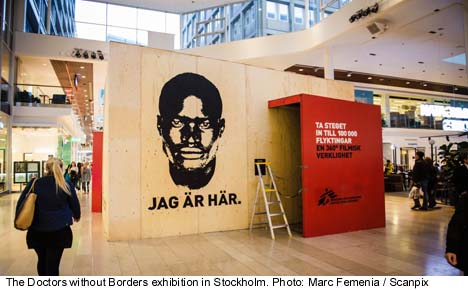 The two masked men threw the smoke bombs in the exhibition premises at the Galleria centre which is located in central Stockholm. Emergency services were quickly on the scene whilst the smoke bombs self extinguished. No injuries were reported.

“It is unacceptable that something like this happens, that someone could do such a thing,” said Johan Mast, general secretary of Doctors without Borders who had organised the exhibition about refugees in south Sudan.

The exhibition is currently touring Sweden and is due to arrive in Malmö next week followed by Gothenburg.

“As it looks now we will continue the show in Malmö and Gothenburg and hope that lots of people come and see it,” added Mast who said that Doctors without Borders had not received any threats prior to the attack.

Doctors without Borders created the exhibition in co-operation with two documentary makers to educate people about the refugee situation in south Sudan. Visitors to the exhibit would step into a room where a film from a camp is shown to create a 360 degree effect.

“It is striking how much illusion you can create when you are surrounded with film and the audience is set in the middle of the story that goes on on the film,” said documentary maker Anders Birgersson to Radio Sweden recently.

Media reports indicated that the masked men threw leaflets promoting a Nazi website but Doctors without Borders nor the police were able to confirm this.

“For us it does not really matter who has done this, it is equally unacceptable whoever it is,” added Johan Mast.

No arrests have yet been made in connection with the attack and the decision was taken to close the exhibition in Stockholm. A security review will take place before the exhibition transfers to Malmö this week.