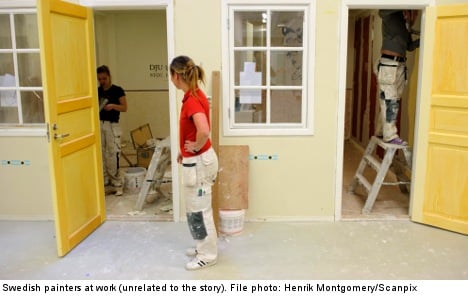 The firm with the lowest bid, Rudolfs Måleri, won the contract. The same firm managed to land a further six municipal painting assignments that spring, according to a report in the Sydsvenskan daily on Monday.

The huge differences in the bids attracted the attention of the unions who were baffled as to how the firm could carry out the work at such a low price.

“It is not fair, either against our members or companies that employ our members. There is nothing to discuss. The contracts must be competitively neutral,” Thomas Wessman at the painter’s union said to the newspaper.

According to Sydsvenskan, the Jobb Malmö programme broke its own rules that require administrators to avoid displacement effects in the labour market.

A full-time trained painter costs an employer around 35,000 kronor ($5,430) per month including payroll taxes, whereas a municipal intern is free of charge.

The firm has conceded that the free labour was the reason they were able to undercut their competitors, but claimed that there were plans to employ four of the interns on formal employment contracts.

There was no suggestion that owner Rudolf Belec or his firm did anything wrong by offering the interns work and criticism has been primarily directed towards the Jobb Malmö work experience programme.