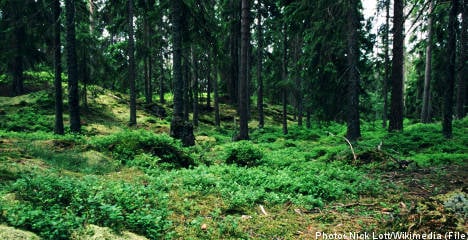 “The fact that we found him probably saved his life,” Temo Allenbäck, a duty commander with the Gävleborg County police, told the TT news agency.

The 65-year-old man was alive but suffering from extreme exhaustion and barely able to communicate with officers who located his vehicle in a wooded area off Route 50 near the border between Gävleborg and Dalarna counties in central Sweden.

The man had left home on Saturday night but failed to return. On Monday concerned relatives contacted police, who finally found the vehicle shortly before 1am on Tuesday.

“We were able to trace his mobile phone and found him alive in his car 30 to 40 metres into the woods. The search took a while because it’s a pretty big area you need to search when tracing. But suddenly police caught a glimpse of something in the woods, and that was the car,” said Allenbäck.

Emergency crews who arrived on the scene were able to extract the man from his car and put him in an ambulance that took him to hospital in Falun.

“We were able to speak with him, but we didn’t formally question him,” said Allenbäck.