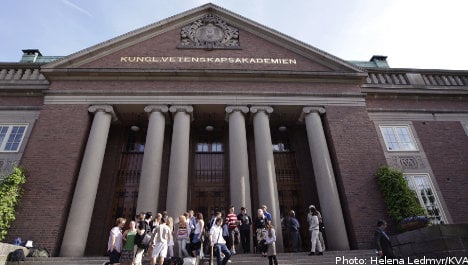 “Honestly speaking, we have no idea where he plans to be. If he wins, there will be a press conference – on Friday,” a source with knowledge of the situation told the TT news agency on Tuesday.

According to the tipster, such behaviour is typical of Higgs.

“It’s going to be impossible to contact him. He doesn’t have a mobile phone. He is, ironically, not that smitten by modern technology,” the source told TT.

Higgs’ name was given to the Higgs particle, also known as the Higgs boson, the existence of which was confirmed earlier this year through experiments carried out at the Large Hadron Collider (LHC) operated by the European Organization for Nuclear Research (CERN) in Switzerland.

The discovery of what was dubbed by some as the “God particle” has been called one of the most important finds in the history of science, as it confirms the standard model of the universe and helps explain why particles have mass, and in essence, why we exist.

Higgs theorized its existence back in 1964 and is the clear favourite to win the 2013 physics Nobel, although the 84-year-old Briton may end up sharing the prize with a number of other researchers.

The prize is set to be announced at 11.45am on Tuesday at the Royal Swedish Academy of Sciences in Stockholm.

RELATED STORY: The Swedish scientist behind the Nobel Prizes