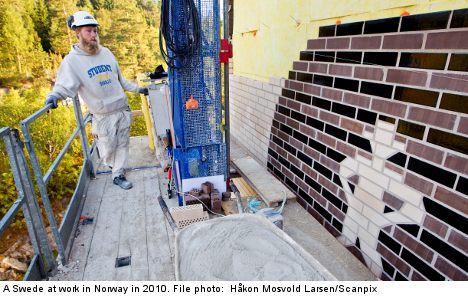 The university’s Frisch Centre reported that there were now roughly 28,000 Swedes aged between 17 and 25 working in Norway, primarily in restaurants, hotels, and clothes shops – a twenty-fold increase on the 1,300 working in the country in 1990.

“Norwegian and Swedish youth are quite similar and compete for the same jobs,” Bernt Bratsbeg, a senior researcher at Frischsenteret, told Aftenposten newspaper.

“When the number of Swedes increases so strongly, it becomes more difficult for Norwegian youth to find part-time jobs and summer jobs.”

Alexander Gustavsen, the head of operations for Deli de Luca, a chain of cafés and convenience stores, said many of the chain’s franchise owners prefer Swedes. “They work hard, are reliable and are only here to work,” Gustavsen told Aftenposten newspaper.

The Local reported last year that such was the allure of the Norwegian job market, whereas Sweden battles entrenched youth unemployment, that Söderhamn municipality decided to pay its young residents to head over the border.

More than 100 young people from Söderhamn, located about 250 kilometres north of Stockholm, had at the time already left the town of about 12,000 residents to seek their fortunes in Norway, according to a report by Sveriges Radio (SR).

Söderhamn resident Andreas Larsson had been out of work for two years before taking advantage of the programme, organized with Sweden’s employment agency Arbetsförmedlingen, and found work as a truck driver in Oslo.

“I came here on a Thursday and had a job by Monday morning. It went that fast. It felt almost unreal, like I’d come to the promised land,” he told SR.

(Arbetsförmedlingen), offers unemployed young people a month-long preparation course, paid transit to Oslo, as well as a month of free accommodation in the Norwegian capital.

Once in Norway, the jobless young Swedes also receive help from job coaches from Nordjobb, a service that arranges jobs for young people in the Nordic countries.

Mohamed Chabchoub, head of the local employment office in Söderhamn, defended the programme, explaining that it was in-line with the employment service’s mission.

“We’re not sending them away; we’re helping them take a step forward and to have a richer experience,” he told the broadcaster.