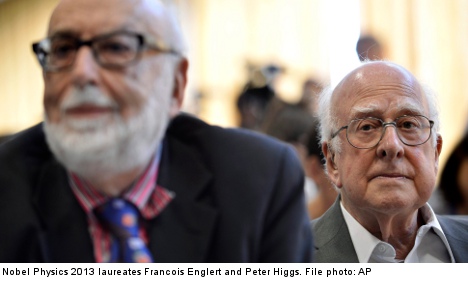 Originally scheduled for 11.45am, the announcement of the 2013 Nobel Prize in physics was pushed back three times on Tuesday, leading to wild speculation as to what could have caused the unusual delay.

Some guessed that the delay was due to an inability of members of the Royal Academy to reach Peter Higgs, who along with Francois Englert was awarded the prize “for the theoretical discovery of a mechanism that contributes to our understanding of the origin of mass of subatomic particles”.

Earlier on Tuesday, Swedish media had reported that Higgs, who was widely tipped to be among the prize winners, planned to “go into hiding” on the day of the announcement.

Others theorized, however, that the delay resulted from a lack of consensus among members of the Royal Academy on who deserved credit for the Higgs discovery.

While Higgs and Englert laid the theoretical groundwork for the discovery, some members of the Royal Academy thought the prize should be shared by those who actually conducted the experiments that helped confirm the existence of the Higgs particle.

“I think it’s incredibly unjust,” Anders Bárány, a professor emeritus of physics at Stockholm University and a member of the Royal Academy, told Sveriges Radio (SR).

Bárány, who is the grandson of Nobel laureate Robert Bárány, explained that it was the first time that the prize citation text named a lab, the European Organization for Nuclear Research (Cern) in Switzerland where the experiments were carried out, as well as the two detectors, Atlas and CMS, but that no one from the labs was included among the actual prize winners.

“I don’t think they’re going to be satisfied with that,” Bárány said.

Following Tuesday’s announcement, another member of the Royal Academy, Björn Janson, a professor of physics at Chalmers Institute of Technology in Gothenburg told The Local that it was “theoretically possible” for an institution to be named as a winner of the physics prize, but that it has never happened before.

“I think those experimental researchers have done incredibly fantastic work and should be rewarded,” he said, adding that there had been “a lot of discussion” leading the physics prize announcement to be be delayed.

Bárány is not a member of the Nobel Committee for Physics which determines the winner, or winners, of the prize.

Other Academy members argued that there was never any real chance that Cern would pick up the coveted prize.

“It was discussed a lot. But we must follow the (Nobel’s) will as I see it. There is nothing in it about institutions so in that way the decision was dead simple,” said Hans Ryde, professor of physics at Lund University.

The chairman of the prize committee, Lars Brink, defended the decision, saying it was a “theoretical prize”.

He denied that there had been lengthy discussions about including Cern.

“That’s speculation. It’s not true. Those are people who are speaking out of hand,” he told AFP, pointing to the confidentiality of discussions.

Panel members are sworn not to reveal the contents of their discussion. Details are released 50 years later.

To give the prize to an organization “was not an issue,” Brink insisted.

Apart from the peace prize no other Nobel Prize has ever been awarded to a organization, but according to the foundation which manages the fund there is nothing in the rules to prevent it.

“It’s up to each prize-awarding institution to make that decision itself,” said Nobel Foundation spokeswoman Annika Pontikis.

“The statutes of the Foundation say that each prize-awarding institution shall decide whether the prize can be awarded to an organization or an association.”

That has led some to suggest that the Royal Swedish Academy of Sciences should review its century-old policy of only honouring people.

“Research is changing. If you go back a hundred years it was about a single person doing experiments and making discoveries. And today it’s 6,000 or so people — a sort of collegial research situation,” said Academy member Per Carlson, professor of elementary particle physics at the Royal Institute of Technology.

“I don’t know if the Academy will open up the possibility to give the prize to organizations in the future — it’s a possibility,” he suggested. “In my view it should be possible.”

The Nobel prizes for science have also been criticized for being hampered by the three categories selected by Swedish industrialist Alfred Nobel when he set up the award.

The three categories — medicine or physiology; physics; and chemistry — reflect the main scientific disciplines that prevailed at the turn of the 19th century.

They do not specifically include the life sciences, which developed massively after the discovery of the structure of DNA in the middle of the last century.