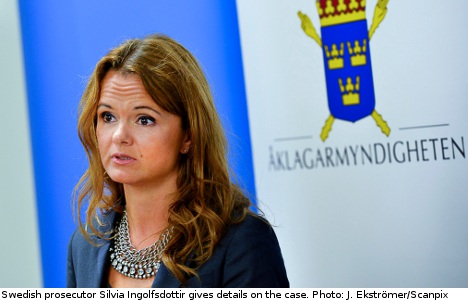 “He appears to have had a normal, functional life with a wife and a job,” prosecutor Silvia Ingolsfdottir said in describing the man who will now stand trial for six rapes, including multiple attacks on a 17-year-old girl.

“What I’ve seen is the other side, where he appears to be a sexual sadist due to the sexual acts that excite him, with a focus on dominance and violence,” Ingolfsdottir told the TT news agency.

IN PICTURES: See the Swedish police’s photographs of sex toys and bondage gear in the suspect’s possession

The man was detained by the police as he made his way to his day job, carrying a bag filled with sex toys, clothes pins, ropes, a blindfold and a balaclava. He has now been charged with carrying out six rapes and selling women for sex.

The 49-year-old is suspected of raping the same girl three times, when the victim was 17 back in 2002. The man pretended to be a fashion photographer, and lured her to the place of the attack where he forced her to have sex. During one alleged assault, he was accompanied by two other masked men, who also allegedly took turns raping her. The main suspect tied up, blindfolded and whipped the girl during the suspected gang rape.

In encounters with other victims, the suspect had up to 25 men with him, the prosecutor explained. The man also told women they had to have sex with him so he could “try them out” for prostitution, or as payment in kind when he recruited sex buyers for them.

The prosecutor will argue that the man manipulated his way to sex and that the suspect’s main motivation was not money but access to the women’s bodies.

The man has used several different aliases, more than 40 according to the investigators, to get in touch with, recruit or cajole women into selling sex. Posing as a woman, the 49-year-old told would-be victims that prostitution would allow them to earn significant amounts of money. He had some ten mobile phones in his possession upon his arrest.

There are a total of 13 plaintiffs in the case against the man. Several of his victims first contacted the police in Stockholm a decade ago, but claim that law enforcers did not take their complaints of rape and pimping seriously.

A Stockholm city police spokeswoman told Sveriges Radio that officers on duty at the time had not found the women’s stories plausible.