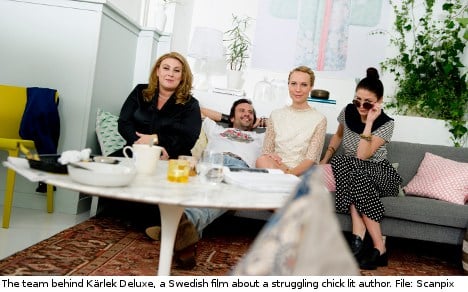 “Reading fiction is a meaningful activity that women who are on sick leave decided to do by themselves, and it’s strengthened their ability to take part in everyday activities,” stated work-life counselor Lena Mårtensson, who worked on the study with literature researcher Cecilia Pettersson at Gothenburg University.

The findings are based on in-depth interviews with eight women who were on sick leave between four and 36 months. Most women read either light-hearted fiction such as chick-lit or relationship dramas that depicted health problems mirroring their own.

The results of the study came as no surprise to Heli Kärkkäinen, 53, who read her way out of illness when she became depressed and couldn’t work full-time.

“I’ve always read a lot, but all of a sudden the only place I could read was in the sauna,” Kärkkäinen told The Local about her need to escape and open a book in a place where she wouldn’t be interrupted.

“More superficial thrillers don’t demand a lot of concentration so I used them as a means of escape, but both self-help books and some chick-lit were means for me to recognize my own situation in the plot lines,” Kärkkäinen said.

“Literature is often a way to either experience things you haven’t experienced yourself, or to recognize yourself in,” the former Swedish Trade Union Confederation (LO) ombudsman said.

She said that as a Finnish immigrant to Sweden in the 1960s, when Finns were looked down upon, reading in the sauna was “one of the most taboo things you could do”, but her need for silence and a good book trumped the taboo.

Kärkkäinen was also keen to underscore that not all chick lit is light-hearted.

Despite the cult status of international authors such as Helen Fielding and Marian Keyes, the term “chick-lit” has not gone unscathed in the debates about its literary merit.

“Chick-lit has become associated with a genre where characters spend most of their time thinking about the colour of their lipstick,” author Katarina Sundberg told Upsala Nya Tidning (UNT) earlier this year upon releasing her novel We are not the kind of people who end up with each other at the end (Vi är inte sådana som i slutet får varandra).

The focus on relationships in chick lit was part of the allure for the women who were recovering from illnesses and took part in the study at Gothenburg University’s humanities faculty.

The researchers found that the women used literature for several purposes – for example, to relate to the dilemmas described in the plot, or as simple distraction to keep the chores of every day at bay.

“It is also common for the same women to read in different ways but at different times during her sick leave, and to feel that this influences their recovery in a good way,” researcher Cecilia Petterson said in a statement. “This shows the breadth of therapeutic reading.”