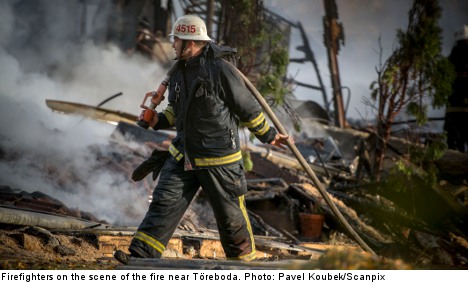 Police first received a call around 4am from a man who reported there was an unknown intruder in the house, which is located in the town of Töreboda in Västergötland County.

During the call, the man reported that the house had caught fire.

“We sent out a patrol car and when it arrived, the fire was raging,” police spokesman Thomas Fuxborg told the TT news agency.

“The police officers on the scene also saw a man who tried to flee on a motor scooter.”

According to Fuxborg, the man tried to run the officers down when they exited their car.

“They then opened fire with their service weapons and the man could be arrested,” he added.

The man wasn’t hit by any of the shots fired by the officers, police said, and it remains unclear exactly how many shots were fired.

When the man was arrested, he was found to be carrying items taken from the house.

Police, however, refuse to offer details about what exactly the man was carrying and what, if any, relationship he had to the people who lived in the house.

One man managed to escape from the burning house, but emergency crews fear that another person may have been inside the house.

The man who was arrested is behind held on suspicion of aggravated arson and crews continued to work to contain the fire late into Thursday morning.