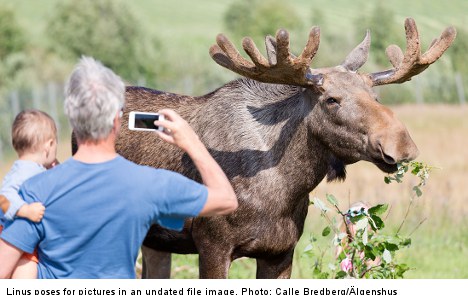 The hunter has sued the sanctuary seeking the return of the antlers and police have launched an investigation into the matter.

“The whole thing is completely ridiculous and terribly unnecessary,” Christer Johansson at the Älgens Hus elk sanctuary told The Local on Thursday.

Linus, a 2-year-old elk who has spent his entire life in captivity, met a bloody end after escaping from the sanctuary in Bjurholm in northern Sweden in September.

“Linus was a terrific elk. He was like a dog. He’d lick your face and was very easy-going around children,” Johansson’s son Daniel told The Local.

Linus was one of the sanctuary’s biggest attractions, as his calm demeanour meant that children who were visiting could ride on his back

“Losing him is like losing a pet. It’s hard, but we’re just going to have to move forward,” Daniel Johansson added.

Linus was shot after he managed wriggle under a fence surrounding his enclosure. His brief flirt with freedom was cut short a few kilometres away when he was spotted and shot dead by a hunter.

After Linus’ slain body was identified, Christer Johansson reclaimed the antlers, a move which prompted a response from the hunter who claimed that as the elk was in the wild, his body legally belonged to the hunting party.

“I have reported Christer for theft on the advice of The Swedish Association for Hunting and Wildlife Management (Svenska Jägareförbundet). He took my antlers,” hunter Stig Emilsson said to Sveriges Television (SVT).

The police have since confiscated the antlers and launched an investigation into the case to determine who is the rightful owner to Linus’ remains.

“We don’t really care about the antlers at this point, but we do want to know how cases like this should be handled in the future,” Daniel Johansson said.