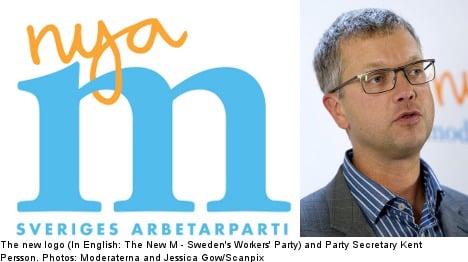 “The election logo is a complement to our regular logo and is a clear signal that the ‘New Moderates’ main political issue is employment,” the party said in a statement on Thursday morning.

The Moderates, the party of Sweden’s Prime Minister Fredrik Reinfeldt, have long profiled themselves as the “The new Moderates” mirroring the image shift made by the UK Labour Party under Tony Blair, except from a different political direction.

As part of this re-styling the party adopted the slogan “Sweden’s new workers’ party” which has now been shortened to “New M – Sweden’s workers’ party”.

“We are now being straightforward. We are Sweden’s workers’ party,” party secretary Kent Persson told journalists on Thursday.

The makeover is set to be formally launched at the party conference next week, but reactions from opponents and unions have been immediate.

“Your logo is a hard slap in the face for the hundreds of thousands of people who lack jobs,” the Swedish Trade Union Confederation (Länsorganisationen — LO) stated on its official Twitter feed on Thursday.

“So the Moderates are spending their time changing their logo again. Personally I am spending my time talking to people about how to improve Sweden,” she wrote.

Sweden goes to the polls in September 2014 with the Moderates hoping to be elected for the third consecutive time. Current opinion polls indicate, however, that support for the Alliance government is in decline.