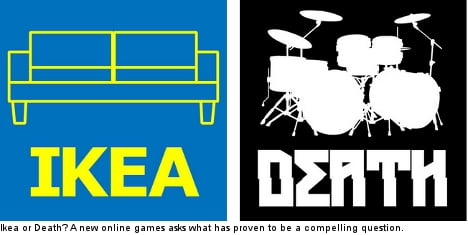 Does “Absu” sound like an Ikea table or a metal band? What about “Klubbo”? That’s what users have to decide in the new internet game, Ikea or Death?, that went viral less than 24 hours after its release on Wednesday.

By the end of the week, the game had attracted nearly than 350,000 Facebook likes as well as a raft of media attention from tech and music sites across the globe.

The game is the brainchild a few colleagues at Gatesman+Dave, a US-based marketing firm based in Pittsburgh, Pennsylvania.

According to Mike Wellman, a programmer at the agency, Ikea or Death? was so popular that it crashed the agency’s servers.

“It’s so simple and so sharable, it just really took off.”

The whole thing started, perhaps unsurprisingly, with a trip to the local Ikea.

Jeff Barton, a creative director at the firm, accompanied writer Sam Panico, a self-confessed metal head who had never been to Ikea, on a trip to the Swedish furniture giant in an effort to “get away from the office and pick up some furniture for the brainstorming room”, Panico explained.

“I’m single for life and have no kids so I have no reason to go to Ikea,” he said.

And while most shoppers may marvel at Ikea’s low prices and modern designs, Panico found himself fascinated by the names of the products.

“I listen to lots of metal, and I couldn’t believe how many of the names of Ikea products reminded me of death metal bands,” he said.

As the two walked through the store, Panico began shouting out the names of Ikea products in a “growling, death metal voice”, sending Barton into hysterics.

“Norden, for example, is an Ikea table, but it’s also a folk black metal solo artist,” he explained.

“And then there is another table, Lack, which just sounds like a metal band name. I wish my band was named Lack.”

Barton and Panico continued batting about the names of Ikea products and death metal bands as they returned to the office, where soon other colleagues also found themselves doubled over in laughter.

“We were having so much fun, we thought, ‘We have to share this with the world.’,” said Panico.

The pair enlisted several other colleagues to develop a short quiz that asks players to guess whether a name belongs to in Ikea product or a death metal band. Within a few days, they’d cooked up Ikea or Death?, which they put live late on Wednesday night in the US.

The response has been “overwhelming” explained Panico.

“It’s amazing that you can take such a simple idea and put it out there can engage hundreds of thousands of people,” he said.

“It’s like we’ve united two worlds that otherwise wouldn’t have met before. It’s fun to think that metal heads who would never think about buying a new couch are now looking at Ikea’s wares. And that there are housewives and dads who now know the names of all these death metal bands.”

It remains to be seen whether Ikea or Death? will bring in any real business for Gatesman + Dave, but the game has certainly raised the firm’s profile.

“We’ve been pleasantly shocked by all the big agencies and clients who have gotten in touch and shown interest since we launched the game,” said Panico.

But what does Ikea think of it all?

According to Panico and his colleagues, social media traffic indicates that staff from Ikea outlets in the United States have been enjoying the game, although the Swedish furniture giant hasn’t gotten in touch directly about the unauthorized use of its brand.

When reached by The Local for comment on the game, officials with Ikea in Sweden remained cool to Ikea or Death?, despite its growing popularity.

“We are not behind the project and we are very careful with our brand,” an Ikea spokeswoman said on Friday.

“If it’s the case that someone is using the brand, then of course that’s something we will look into.”

“This game can obviously be very positive for Ikea, especially since it didn’t come from Ikea. As there’s no commercial backing from Ikea, it’s more authentic. People are hearing about it from their friends, which makes them more likely to see it,” he told The Local.

“The campaign is also specifically connected to Ikea’s products, which is very positive for their company.”

Von Hejner echoed Panico’s observation about the how Ikea might also benefit from the game’s popularity among metal fans.

“It’s reaching a different audience; a younger target group and rockers that may help give Ikea a more positive reputation,” he said.

The gang at Gatesman + Dave isn’t worried about running afoul of the Swedish furniture retailer’s efforts to protect its brand.

“How could they not like the game?” asked the agency’s head of digital, Paul Magnani.

“We’re hoping they contact us. It would be great to work with Ikea. They are a great brand with a great sense of humour.”

SEE ALSO: The biggest Ikeas in the world