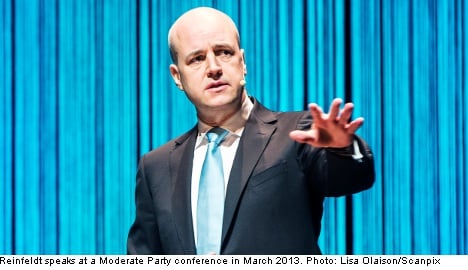 The poll was carried out by United Minds, and commissioned by the Aftonbladet newspaper.

It saw the Moderate Party gaining 23.6 percent of the votes, compared to 33.7 from the Social Democrats. Next highest was the Sweden Democrats with 11.1 percent, then the Green Party with 9.4 percent.

“The Moderates have lost a lot of their voters who they had won over from the Social Democrats over the last two elections,” Carl Melin of United Minds told the paper.

“Above all, Reinfeldt’s government lost the faith of the public when it comes to jobs, since unemployment has stung hard.”

The results weren’t the only blow for Sweden’s current prime minister, with his centre-right government’s alliance parties pulling in 37.8 percent of the total vote, while the red-green opposition parties gained 49.3 percent.

The gap marks the largest since the paper and United Minds began the polls in 2009.

Sweden heads to the polls in mid-September next year.