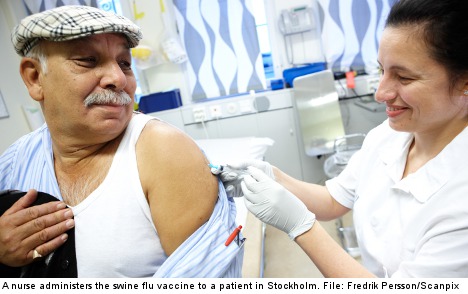 The local Värmlands Folkblad newspaper reported on Wednesday that the patient had to be admitted to hospital for several days.

“The patient ended up in intensive care due to problems breathing,” said county council communicable diseases doctor Olle Wik, who said, however, that laymen should avoid drawing any conclusions about the severity of the upcoming flu season based on the case in Värmland, central Sweden.

“That’s about as smart as thinking you’re gonna have good weather on your entire holiday just because the sun was shining on the first day,” Wik told the TT news agency.

The National Board of Health and Welfare, meanwhile, has said that all pregnant women should make sure to get a jab against influenza as they are at higher risk than others.

“That’s definitively good. We underestimated the risk for pregnant women before,” Wik commented. “We’ve had some pregnant women who fell ill without explanation, and a few who had to be put on a respirator.”

The flu could also put the unborn child at risk, he explained.

“It’s in particular towards the end of the pregnancy that the woman’s immune system becomes weaker, in order to make sure her body doesn’t reject the fetus,” he said. “Which means the pregnant woman is vulnerable.”

Already in February of this year, medical experts stated that swine flu had become part and parcel of the flu season – despite 66 percent of the Swedish population being vaccinated against the disease in 2009.

“Swine flu has become a common type of influenza, it doesn’t hit as hard as we feared it would in the beginning, it’s just like any other cold,” epidemiologist Hélène Englund at the Swedish Institute for Communicable Disease Control (Smittskyddsinstitutet) told the Dagens Nyheter newspaper (DN) at the time.

The institute recommends good hygiene – especially washing your hands and coughing into your arm not your palm – as the best way to protect yourself and others from being infected.