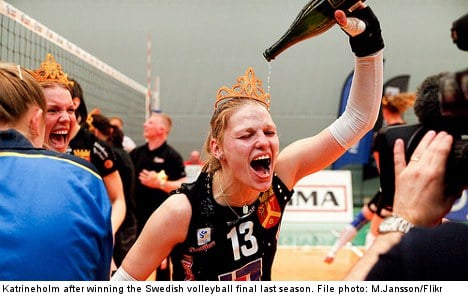 The player-contract scandal has erupted in the Swedish volleyball world and could go deeper than initially suspected, with several foreign players speaking up against low pay, including US talent Crystal Palmer.

“What’s most upsetting is that you don’t know the rules,” Palmer told Sveriges Televison (SVT), whose sports reporters earlier this year revealed that a Ukrainian player with the Lindesberg Volleyball team in central Sweden, which reached the Swedish league finals last season, had barely been paid at all.

To import non-EU employees to Sweden, the person-in-question must earn a minimum of 14,300 kronor ($2,200) a month, but Palmer added to the simmering fracas by revealing she had been paid about 5,000 kronor a month.

Spiker Nadya Greseva, meanwhile, has now been relegated to her home country of Ukraine after the Swedish Migration Board (Migrationsverket) did not renew her work visa. Local media had shone the spotlight on the club having two contracts – one that followed the legal minimum of 14,300, while Greseva pocketed no more than 2,400 kronor ($370) a month.

The scandal has left the Swedish Volleyball Association up in arms, with chairman Saffet Eraybars telling SVT that Lindesberg’s treatment of its foreign-born stars was “totally irresponsible and completely unacceptable”. He further urged non-EU players with any questions about their contracts and pay to get in touch with the association.

Yet, Lindesberg appeared not to be the only volleyball club toying with the rules.

Katrineholm Volley has, according to reports in the local media, paid several players off the books, with five players not paying taxes. Cross-referenced with the minimum requirements stipulated by the Migration Board, their total pay should have amounted to between 40,000 and 60,000 kronor but the Tax Agency (Skatteverket) has no record of their income.

The club’s treasurer released a written explanation, stating that one player “tried to register to pay tax but was rejected”.