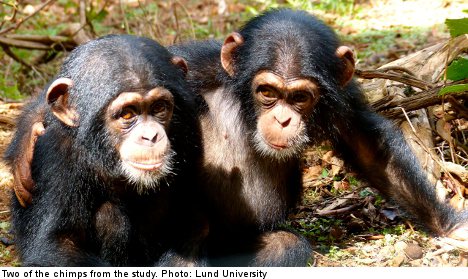 Researchers from Sweden’s Lund University have found that chimpanzees yawn when they see humans yawning, much like humans do.

IN PICTURES: Get up close and personal with the chimps from the study

“The main thing we discovered is that chimps have the same developmental patterns as humans do,” Danish researcher Elainie Madsen told The Local, adding that the study appeared to show that chimps and humans development in understanding and using empathy blossomed at a similar pace.

Madsen carried out the research in Sierra Leone with 33 orphaned chimpanzees between the ages of 13 months and 8 years.

“This is the first research of its kind. There was a study ten years ago – and a few since – where chimps were shown video footage of other chimps yawning, but this is the first time chimps’ reactions to humans were noted,” Madsen added.

“Contagious yawning, is such a weird thing… it’s so simple… and empathy is a key topic in animal psychological studies and this study could be one step of getting closer to understanding animal empathy.”

Similar studies have been carried out in the past on birds, bonobos, and baboons, and even dogs, which Madsen explained yawn after seeing humans yawn from the age of 7 months.

Madsen also pointed out that previous studies have shown that chimps tend to be “xenophobic” among other chimps from other tribes, only yawning when they see close members of their own tribe doing the same. The Lund study showed that chimps were perhaps more responsive to humans due to a “collaborative” cross-species relationship.

Now back in Sweden, Madsen and her team will continue investigating their results.