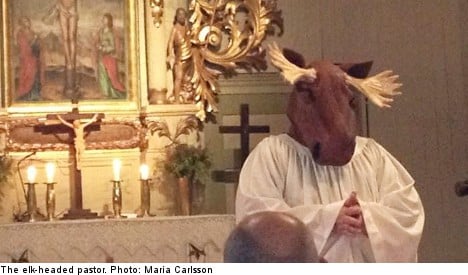 This week, tens of thousands of elk hunters have decamped to the Swedish wilderness in hopes of snagging their own king of the forest as Sweden’s elk hunting kicked off on Monday.

Keeping with a long-standing tradition, parishioners filled the pews at the Tveta Church in Värmland County on the eve of the hunt to hear the annual “elk hunt sermon”.

And it didn’t take long for the 30 to 40 hunters and accompanying family members to realize that this year’s sermon would hold something different.

Before guests even had a chance to get comfortable in the benches at the centuries-old wooden church, pastor Maria Carlsson emerged wearing a plush elk head complete with antlers.

“I’ve been thinking about it all autumn. I wanted to do something fun and a little different,” she told The Local on Thursday.

It wasn’t long after completing classes to acquire her licence last summer that aspiring hunter put in her request to preach at the annual elk hunt service.

“I really wanted it. I’m the only active pastor in the area who is also a licenced hunter, so it seemed fitting,” Carlsson explained.

Her inspiration for the sermon came as she was strolling through the streets in Uppsala, where she was taking classes at the Church of Sweden’s Pastoral Institute.

When she readied herself to preach to the congregation on Sunday night, Carlsson wasn’t nervous about what she was going to say.

“But it was sort of hard to see with the mask on my head, so I was a big concerned I might trip and fall,” she said.

The stunt proved a hit with those who had come to the church looking for some spiritual guidance ahead of the big hunt.

IN PICTURES: Images from the sermon and the hunt

“There was a fair amount of laughter in the pews,” Martin Wester, one of the hunters on hand for the elk hunt sermon, told The Local.

“It was certainly a different approach to the blessing, but think it was very well received. It made people think a bit.”

Carlsson explained that the mask was part of her attempt to impersonate and elk and offer a sermon from an elk’s perspective to the hunters gathered before her.

“I wanted to drive home the importance of being thankful for all of God’s fantastic natural creations and that it’s important to be thankful even if things look bleak,” she said.

She admitted that it wasn’t easy to exude an optimistic view of life as an elk preparing to be in the crosshairs of Swedish hunters.

“I told a story about an African chieftain who had a friend that always looked on the bright side of things,” she said, adding that the story comes from a book entitled Det är aldrig kört (‘It’s never over’) that includes a number of uplifting tales.

According to the story, after accidentally shooting off the chieftain’s finger, the friend remains adamant that the incident is a good thing. His optimism is proven justified later when cannibals they two encounter later opt not to eat them because the chieftain’s thumb is missing.

“I wanted people should be careful and thankful as they embarked on their hunts; that they should be sure of their shots before pulling the trigger,” said Carlsson.

Following the sermon, Carlsson joined an 11-person elk hunting team that took the woods near her home in Långserud, 30 kilometres north of Tveta.

And much to her delight, Carlsson managed to shoot an elk of her own on Thursday morning.

The beast had been hit first by shots from a fellow hunter, but continued to charge in the pastor’s direction.

“I didn’t think I’d get a chance, but it kept coming toward me. I didn’t really think much. I just raised my gun and fired,” she said.

While the elk’s appearance in her sights may not have been a sign from God following her sermon, Carlsson didn’t completely discount the possibility of divine intervention.

“I had prayed that I’d be able to shoot an elk on my first hunt, so in a way, my prayers were answered,” she said.

While the antlers of the 200-kilogramme elk went to her colleague, Carlsson was thrilled to be able to take home the elk’s heart.

“I’m hoping to be able to have it smoked,” she added.