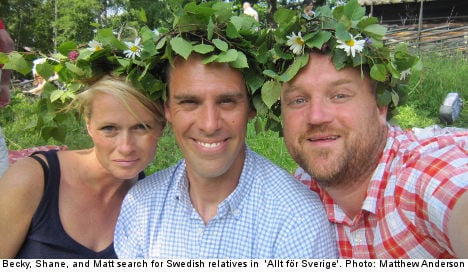 The reality show reconnects the winner with Swedish relatives – provided they overcome the culture shock.

Allt för Sverige (Everything for Sweden) is a Swedish reality TV show that plucks ten Americans from their homes and drops them on the soil of their ancestors. The third season, which has already been filmed, is set to premier on Sunday, October 20th, when a whole new gang of curious Americans will get their first taste Sweden – pickled herring included – as they compete for a chance to meet their Swedish relatives.

IN PICTURES: The 10 Americans searching after their roots

“I wasn’t even 100 percent sure I was Swedish,” contestant Shane Booth tells The Local. “My grandma always said I was, but then, she also said I was related to Pocohontas.”

Booth, a photography professor originally from Nebraska but now living in North Carolina, knew absolutely nothing about his Swedish family when he applied to be on the reality show. In fact, he knew so little that he almost didn’t make the cut.

“I didn’t even have last names, just a box of pictures with first names written on them. They couldn’t find my family,” he explains.

Booth finally uncovered a last name when he ripped off the backing of an old photo postcard. But he still couldn’t find any information until he got creative with the spelling.

“I stumbled across one case of a different spelling on Ancestry.com,” Booth says. “And that opened the door. Otherwise I wouldn’t have gotten on the show. It was like winning the lottery.”

Booth’s story turns out to be one of the most interesting of the season, in a dramatic tale of pride, prison, and stolen horseshoes which forced his forefather out of Sweden. But Booth insisted that viewers watch the show to find out more.

“My reaction was utter shock,” contestant Matthew Anderson, a stage actor based in Washington, DC, recalls of being selected. “I said, you better not be kidding me now, because my emotions can’t take it.”

The first episode begins when the contestants arrive in Sigtuna, the area around Arlanda Airport. Already emotional, the contestants were all deeply affected by their first glimpses of Sweden.

“My gosh, Sigtuna is like Nebraska on steroids,” Booth tells The Local. “Lilacs blooming everywhere, very similar plant life, but more green and beautiful. And you know, everybody says Swedes are beautiful people, and then we got to Stockholm and I said, ‘holy crap, they’re not lying’. They’re gorgeous too.”

The Swedish diet also had quite the impact on the contestants.

“I am all about the yoghurt and cereal, now I don’t drink milk for breakfast,” Booth says.

“I love fika,” Anderson exclaimed. “Here in the US, I say, ‘You know what, friends? We’re fika-ing.’ I really fell in love with Swedish snack food, like Gifflar. I could eat those things like it was my job,” he adds, referring to a type of miniature buns popular in Sweden.

Anderson and Booth, who became close friends during the experience and have talked almost every day since returning to the US, agree the experience was life-changing.

Anderson, who was raised Mormon and came out as gay when he was 25, left the church eight years ago. But surprisingly, his experience in Sweden brought him back.

“By not going to church for so long I was focusing on what the church wasn’t doing for me. But in Sweden, I realized that my great-great-grandfather had been saying the opposite. What does this faith do for me? How does my faith help me, and ultimately, how can my faith contribute to the world around me? So I’m getting my worship on.”

Booth, who just a few years ago was diagnosed with HIV at the same time he lost a dear friend to a brain tumour, says the experience of coming to Sweden changed his entire outlook on life.

“I wasn’t myself. There was a hole in my heart that was filled by the experience,” Booth explains. “And now I can understand life a bit more. I owe Sweden everything for giving me my life back and making me the old happy-go-lucky Shane again.”

Both contestants want to return to Sweden, and Anderson has already booked in Thanksgiving dinner with his Swedish relatives in November. He’s even considering moving to Stockholm.

“Stockholm did something to me, and I would love to live there. Swedes really preserve their history. It’s reflected everywhere we went and in everything we did. There’s this love that Swedes have for their country. And I am so thankful for that.”

Allt för Sverige begins on Sunday, October 20th and airs each Sunday at 8pm on SVT1. The episodes can also be found online on SVT Play.