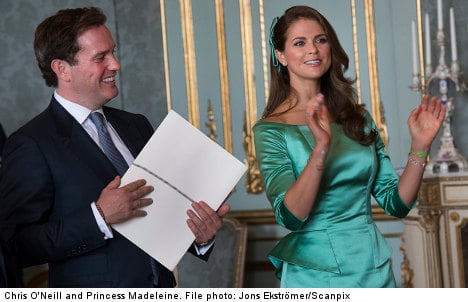 The Swedish princess, who announced in September that she was pregnant, will jet over from the United States to join the rest of her family for the Nobel Prizes award and banquet on December 10th.

"Mr O'Neil will not be attending Nobel because of his work," said royal press secretary Annika Jeppsson to Aftonbladet.

O'Neill, who works as a financier in New York, was unable to attend the annual ceremony last year after previously accepting the invitation due to a work clash.

"I regret this but look forward to participating in future Nobel festivities," he told Aftonbladet at the time.

His decision to skip the Nobel ceremonies a year ago prompted much debate in the Swedish media. In a 2012 editorial in Aftonbladet royal historian Herman Lindqvist said O'Neill "did not understand his role."

"Chris is quite wrong. If he has no vital reason then it is clearly inappropriate," said Lindqvist at the time.

The British-American businessman has previously been the subject of criticism for turning down Swedish citizenship and not wanting a royal title. He also came under fire for being pictured giving an offensive gesture to a photographer.

"Chris O'Neill was last in Sweden when the king celebrated 40 years on the throne but cannot come to Nobel. He will not be able to attend anything," Annika Sönnerberg, assistant information officer at the Royal Court, told Expressen.

When asked if it had been a difficult decision for O'Neill she replied to the newspaper "I can't answer that."

O'Neill won't be the only absentee at the ceremony after Nobel literature laureate winner Alice Munro announced she can't travel to Sweden due to her health.

The 2013 Nobel Prize award ceremony will take place on December 10th in Stockholm.