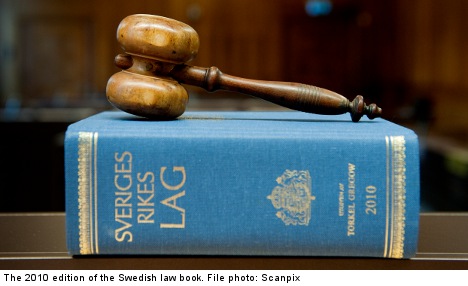 “If feels like a slap in the face and the ruling is a mockery,” the girl told the Aftonbladet newspaper in reaction to the ruling.

“The appeals court’s justification feels like a further insult.”

When the girl was made aware that the clip was viewable online, she reported the matter to police.

During an initial hearing in front of the Skaraborg District Court on the case, the boy admitted to sharing the sex video but said he never intended to cause harm to his ex-girlfriend. He added that he didn’t envisage the video reaching a wide audience, legal trade publication Dagens Juridik reported.

The court ordered him to pay the girl 130,000 kronor ($20,300) for infringement (kränkning) and a further 6,000 kronor for causing pain and suffering along 45 hours community service.

According to the lower court ruling, the video was a “very serious violation of the plaintiff’s personal integrity” as she had been identified in the film and her social life had suffered.

The boyfriend appealed the ruling to the Göta Court of of Appeal, arguing that the damages were too high.

The appeals court agreed, ruling that the damages for infringement be reduced from 130,000 kronor to 25,000 kronor.

The court admitted that the boyfriend’s actions had been “derogatory” to the girl’s reputation, but added that changing social norms warranted a less harsh penalty for his actions.

“One cannot ignore the circumstances that in not all too small circles of the population, it has with time become increasingly socially acceptable to be very open and outgoing in regard to one’s sexual habits,” the court wrote in its ruling, according to Dagens Juridik.

“In light of the reigning ethical and social values should serve as the starting point for the assessment of the size of of infringement damages, these circumstances should not have an insignificant impact on the appeals court’s review.”

In summing up, the court said the girl’s face would have been unfamiliar to most people who saw the video and that the video’s contents had no correlation with the girl’s personality

The 6,000 kronor punishment for causing pain and suffering remains bringing the total damages award up to 31,000 kronor.

The ruling prompted an angry reaction from Aftonbladet columnist Oisín Cantwell, who accused the court of “trivializing” the girl’s predicament and urged the Swedish Supreme Court to take up the case.

“To justify the decision that people today are open about their sex life is an intellectual and moral breakdown,” Cantwell wrote.