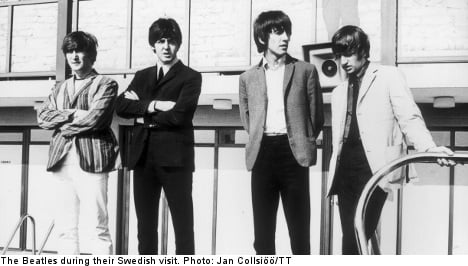 Autumn 1963. Bengt-Åke Bengtsson and some 20 female admirers waited for the British band to alight at Arlanda airport, near Stockholm. There were nine gigs on the calender, inlcuding a stop in Karlstad.

“An amateur jig,” wrote a less-than-impressed critic in the pages of the local newspaper, Nya Wermlands-Tidningen. Bengtsson, however, disagreed

“I think that’s utterly wrong. The Beatles came along with something new,” Bengtsson told the TT news agency on Wednesday. “It was fantastic, novel and fresh. And it wasn’t just the music – it was the clothes, the hair, the chat.”

IN PICTURES: See when The Beatles visited Sweden

The quartet moved on to Stockholm, Gothenburg, Borås and Eskilstuna. A tour that had been three months in the making drew fans in their thousands.

“We really believed in this,” Bengtsson recalled of the tour, which was a success despite the Beatles landing in Sweden before the English language had really spread among the people.

“We didn’t know English in the countryside,” Bengtsson said. “Back then you didn’t care about the lyrics, just about the girls who screamed after the musicians and jumped on stage. They just screamed and screamed.”

Fifty years to the day since George, Paul, John and Ringo dispelled the autumn gloom in Karlstad, the city will host an event to honour their memory.

This time the music will be played courtesy of British band The Overtures, which was the opening act for Beatle Paul McCartney’s performance at the O2 Arena inauguration in London,

The event “Sound-Alike The Beatles” aims not only to recast old Beatles favourites but to “treat us to 60s nostalgia,” the press release for the Friday concert said.