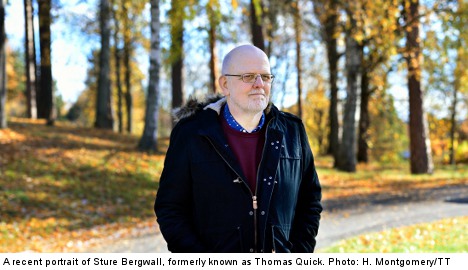 Bergwall, who used the name Thomas Quick while behind bars, confessed to some twenty unsolved murders while behind bars. He has not underdone a full psychiatric assessment since 1991. On Wednesday, an administrative court ruled that a new assessment take place and that it be administered by Sweden’s National Board of Forensic Medicine (Rättsmedicinalverket).

Bergwall welcomed the verdict, but said it could have gone further.

“The best result, of course, would have been to end enforced psychiatric care immediately,” he told the TT news agency. “It was our main demands during the hearing on Monday.”

Bergwall and his legal team had earlier this year already tried to secure a new psychiatric assessment, but an administrative court in Falun said no.

Bergwall had confessed to dozens of murders committed between 1994 and 2001. He was found guilty of eight of them until he dramatically withdrew his confessions in 2008 and was subsequently cleared of all charges.

The last conviction was overturned in July 2013, five years after Bergwall first recanted his alleged participation in the brutal killings.

He has been held at the high-security Säter psychiatric hospital for the last 20 years after he was put away for robbing a bank.

The psychiatric chief at Säter, Vladislav Ruchkin, on Wednesday said the court’s decision to order a new psychiatric evaluation was “unnecessary”.

“There’s not problem with a new assessment, but it won’t change the diagnosis,” Ruchkin told TT.

In 1991, Bergwall was diagnosed with personality disorders, including abnormal sexual inclinations. At the age of 19, Bergwall sexually assaulted four boys at Falun Hospital’s paediatric clinic. He was sentenced to psychiatric care in a closed facility.

Five years later, on parole in 1974, he attacks an acquaintance, hitting his victim over the head with a frying pan and stabbing him more than ten times. In 1990, Bergwall and an accomplice hold a family hostage during a robbery. Bergwall was once again sentenced to psychiatric care.