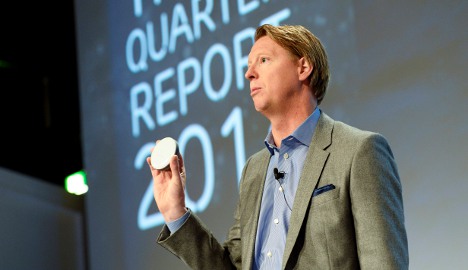 Ericsson share value fell by just over 6.0 percent on the Stockholm Stock Exchange in morning trading.

Net sales were down three percent from the same quarter a year ago to 53 billion kronor ($8.3 billion) “primarily due to continued currency headwind,” Ericsson chief executive Hans Vestberg said in a statement.

Net profits rose to 3.0 billion kronor, up 38 percent compared to the outcome in the same quarter a year ago.

That fell short of the 3.2-billion-kronor forecast by economists surveyed by Dow Jones Newswires.

“We are currently seeing sales coming under pressure,” Vestberg added.

“In addition to foreign exchange, the major drivers for this development are the two large mobile broadband coverage projects which peaked in North America in the first half of 2013.”

He said the company also felt the impact from reduced activity in Japan “where we are getting closer to completion of a major project.”

The company said that without currency adjustment sales rose by 3.0 percent and operating margins continued to grow, to 8.1 percent compared to 6.7 percent in the same quarter last year.

Ericsson’s gross margin grew slower than expected, up 32 percent, compared to 30.4 last year and a forecast of 33.5 percent.

Chief executive Vestberg said that lower activity in telecom networks, the company’s main business, was offset by strong growth in the service business which is still expanding in North America.

A sharp 28-percent drop in sales in northeast Asia was also offset, he said, by strong growth in several regions, including a 21 percent increase in western Europe, mainly due to new investments in fourth generation data networks.