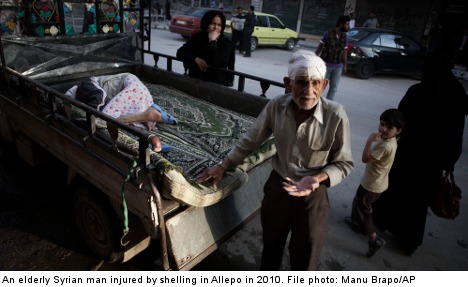 “It’s good that Sweden can contribute with qualified resources to the UN. With today’s decision we continue to support the UN’s and OPCW’s important work to secure the dismantling of chemical weapons,” said Defense Minister Karin Enström and Foreign Minister Carl Bildt in a statement on Thursday.

One of Sweden’s eight C-130 Hercules planes, along with about 70 staff, will be stationed at the military base in Cyprus, according to a statement from the Swedish Defence Ministry. The United Nations and OPCW (Organization for the Prohibition of Chemical Weapons) have until December 31st to utilize the unit in Syria.

weapons, which should be completed by mid-2014 according to a UN resolution adopted last September.

The UN and OPCW began work to dismantle chemical weapons in Syria on October 6th, and informally asked Sweden to contribute aircraft about two weeks ago.

Sweden has supported the UN and OPCW’s work in Syria before by analyzing chemical samples from Syria at the Swedish Defence Research Agency. The head of the UN weapons inspection team Åke Sellström is also Swedish.

Sweden’s neighbours may also be getting involved in the effort. Norway said Wednesday it was considering a US request to destroy part of Syria’s chemical weapons arsenal on Norwegian soil.

Norwegian Foreign Minister Børge Brende said Oslo will respond “as soon as possible,” while adding that Norway does not currently have the equipment needed for the destruction process.