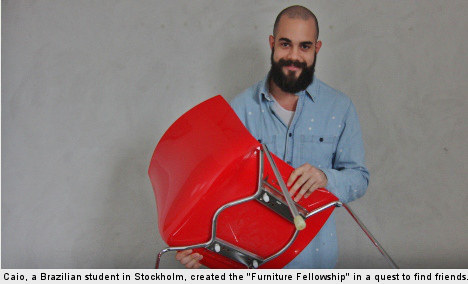 The idea? You buy something at Ikea and find the product's deceptively simple instructions baffling. You ring up cheerful Caio Andrade, he helps you figure out the infuriating furniture, and then you both go out for a beer.

Andrade, like many foreign students living in Stockholm, loves the city and his classes but has had trouble making Swedish friends outside the classroom.

"I saved money for two or three years back in Brazil in order to come here," Andrade, a student at Hyper Island, told The Local. "But I still don't know much about Swedish culture. Swedes are friendly at school but they don't call you up after."

In July, Andrade arrived at Hyper Island, the renowned private educational institution offering classes in digital media and technology. He now lives in student housing with other international students. And while his foreign friends are great, they don't really help him get to know his new home.

Determined to expand his Swedish social life, Andrade began brainstorming. The proverbial light bulb lit up on a recent trip to Ikea.

"I saw that you can pay like 300 kronor ($47) to get someone to help build your furniture. And I thought, 'I can do that.' I mean I have to figure it out still, I haven't put together much furniture myself yet," he added with a laugh. "But I can be patient. Why not?"

So Andrade pulled out his phone, sat down in a display bedroom, and started filming.

"Sometimes it is hard for you to get everything in the right place," he says in his video as inquisitive Swedish shoppers look on. "If you buy something at Ikea, just remember me, so I can help you out. Cheers!"

Andrade launched his website, Furniture Fellowship, last Thursday and so far things are going well. The website includes Andrade's introductory video and Ikea-inspired doodles depicting furniture get-togethers, and encourages visitors to add him on Facebook to get things going.

"A lot of people, mostly Swedes, contacted me saying it's a nice initiative," Andrade told The Local. "No one has said they have any furniture to set up yet, but they've invited me out for beer or coffee. I had my first fika last week. It was wonderful."