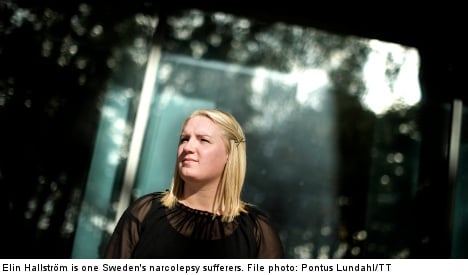 “It was as though she went to bed one night, and the next day she was no longer my daughter,” Mikael Tolf wrote about his now 17-year-old daughter My.

On Friday, the Svenska Dagbladet (SvD) newspaper published the testimonies of six narcolepsy sufferers who do not qualify for compensation from the state, which recommended the vaccine, because they either fell ill or were diagnosed too late to qualify for the state pay-out. SvD has calculated that so fare some 30 patients have been denied compensation. The youngest person in the six cases highlighted by the daily was a nine-year-old boy.

“The limit of eight months is set by our insurance so that the injury with overwhelming probability was caused by (swine-flu jab) Pandemrix,” Anders Öhlén, CEO of Pharmaceutical Insurance (Läkemedelsförsäkringen), which covers everyone who has been treated with prescribed pharmaceutical products or pharmaceuticals purchased from a legitimate dealer in Sweden.

“The medical advisers have made this judgment based on available facts and we have followed their advice,” Öhlén told SvD.

The insruers have approved pay-outs to 192 patients, more than half of 345 reports they have received.

“I fully respect that people think we are being inflexible,” Öhlén’s colleague

Anders Hultman told the TT news agency on Friday. “But we can’t step outside the framework that the insurance is based on.”

In March, the link between vaccine Pandemrix and the compulsive sleep disorder narcolepsy was confirmed by a massive study ordered by the Swedish Medical Products Agency (Läkemedelsverket).

The risk of developing narcolepsy was three-fold if the vaccine had been administered, Ingemar Person, the professor behind the study, said in a statement. The review took place between October 2009 and the December 2011 and compared 3.3 million vaccinated Swedes with 2.5 million who were not vaccinated.

The risk was found to be highest among the youngest people who took the vaccines. For those under the age of 21, the risk of contracting narcolepsy was three times higher for those who were vaccinated with Pandemrix, whereas those aged between 21 and 30 had double the risk.

When Sweden agreed to purchase the drug from GlaxoSmithKline, the contract stipulated that the company would be free of responsibility to cover costs associated with any side effects. Back in 2012, however, Social Affairs Minister Göran Hägglund said the Swedish state would compensate those affected by narcolepsy caused by the swine flu vaccine.

“There have been many a time when My has wished she was dead, to escape this disease,” Mikael Tolf wrote in Svenska Dagbladet on Friday. “That is when you as a parent start crying inside.”

A 20-year-old woman summarized the pay-out quagmire best, however.

“That money and fear can make people so heartless,” Daniela Dahl wrote.