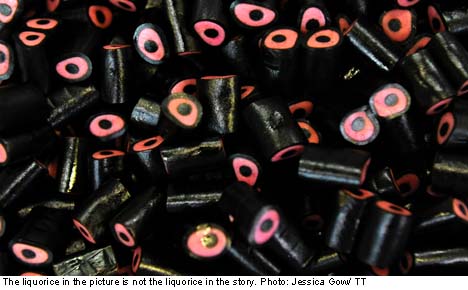 The sweet or salty craving thief struck at a local petrol station where the driver’s truck was parked in the Örkelljunga municipality. Initial reports were that the thief had made off with an entire trailer of liquorice but these were incorrect according to local police.

“That was due to some language confusion. It was about half a pallet that was stolen from the trailer,” said Calle Persson of the Skåne police.

The driver discovered the theft in the afternoon when he woke up from his nap and reported it to the police. It’s unclear whether the liquorice theft was carried out by more than one person.

The type of liquorice that was stolen has yet to be confirmed. The liquorice plant has many purposes including being used to flavour tobacco including Swedish snus.

It is perhaps best known for its use in candy. Swedes are among the biggest consumers of liquorice in the world and its popularity is such that an annual liquorice festival (Lakritsfestivalen) is held in Stockholm.

Police currently do not have any suspects for the theft.