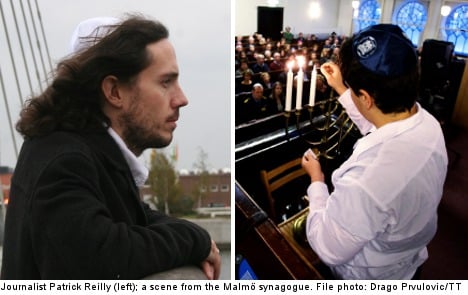 The original article chronicled the experiences of The Local’s Malmö reporter as he went about town wearing a kippah. Stares, giggles and verbal abuse were just some of the things Reilly reported.

It prompted an op-ed in Sweden’s Dagens Nyheter as well as major press coverage in Israel, the US and the BBC in the UK. The issue of anti-Semitism has certainly put Malmö on the map but not necessarily for the right reasons.

Malmö’s new mayor, Katrin Stjernfeldt Jammeh, reacted strongly to the report. Jammeh gave a wide-ranging interview to The Local in September where she promised to get tough on hate crime.

“It is completely unacceptable that anyone feels insecure when they walk on the streets of Malmö, whatever the reason. No one should have to hide who they are or what they believe in. Everybody has the same rights to the public space,” she told The Local.

Many though weren’t so surprised at what Reilly encountered. In the latter part of his experiment a man mouthed “fucking Jew” at him while the reporter added that he felt a general sense of unease throughout the day.

RELATED STORY: Fear and giggles: A day as a Jew in Malmö

“I wasn’t really surprised. If you go around Malmö wearing a kippah then it’s likely you will get some reaction,” local Jewish resident Jehoshua Kaufman told The Local.

Kaufman, who organizes the regular kippah walks, added that he had never been verbally abused for his Jewish beliefs. He said that education is to key to getting grips with anti-Semitism.

“The most important part is the schools. People need to be aware of these negative attitudes and taught not to be hostile towards any particular group. It’s good that people are at least talking about it now,” said Kaufman.

The city’s new mayor confirmed to The Local that measures are being taken to tackle the issue at school level.

“The city's schools are working actively with the issue, and the municipality is working with other agencies (for example the police), religious parishes and different associations,” she said.

Shmuel Goldberg, the American who featured in The Local’s report, has since done a subsequent interview with the local City Malmö newspaper. He was told he’d be killed if he kept wearing a kippah when he was verbally abused in Malmö earlier this year.

Despite this attack he remains sanguine and told City he’d gladly go for coffee with the people who abused him.

“Then they could see I am in fact a nice person,” he said.

Meanwhile, the Jewish reader who contacted The Local enquiring if Malmö was safe to visit, which sparked the original investigation, has since got in touch.

“The experience went the way I predicted it would. I may visit Sweden, to see the museums and try out the food but I will definitely NOT be disclosing my identity,” he said.

Local Jewish resident Jehoshua Kaufman said he will be discussing the matter of anti-Semitism with the police hate crime unit in Stockholm soon. Mayor Katrin Stjernfeldt Jammeh gave a defiant message in the wake of international media attention given to her city.

“I'm not satisfied until all residents and visitors in Malmö feels that the city is theirs on equal terms,” she said.