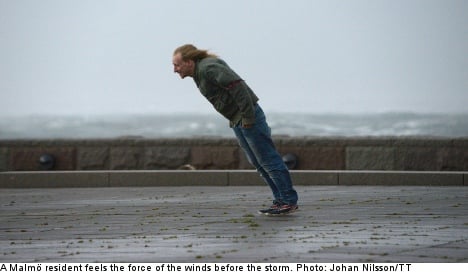 Gothenburg shut from 4pm on Monday, and authorities are requesting that everyone goes home immediately. The Öresund bridge connecting Denmark and Sweden has also been closed off to traffic, TV4 reports.

Parents have been told to pick up their children from school as early as possible. Residents across western Sweden are being asked to stay indoors as everything from the city board to the movie theatres have been closed down.

“This is really extreme,” Skåne Traffic spokesman Ulrika Mebius told The Local. “I have worked with Skånetrafiken for seven years, and I can only recall one other occurrence like this, and that was a snow storm.”

Storm St. Jude, as it was originally called, has claimed several lives in England as trees toppled onto houses and cars. A 14-year-old boy is also expected dead after being swept away by the waves.

Over 220,000 homes in the UK and 75,000 in France were left without power, and a gas explosion in London destroyed multiple houses. The storm is now crashing with vengeance onto Scandinavian shores and has been dubbed Simone, in accordance with the Scandinavian name-day calendar.

“Stay inside if you can. It can be dangerous outside,” SMHI meteorologist Eva Strandberg warned, stating she expects more than 40 millimetres of rain to pound the west.

The winds of Simone may reach 40 metres per second and may be accompanied by tides up to 130 centimetres high. Winds of that strength are classified as a hurricane, and can lift large objects, cause windows to blow in, and throw boats up onto land.

“When it is a class three warning, it’s dangerous to be outside,” Mebius told The Local. “You really should be at home. A lot of the trains and tracks here go through quite woody areas, so there might be many accidents. We recommend everyone go home as quickly as they can.”

The region of Västra Götaland is preparing for rescue and emergency care, readying ambulances and supplies.

“You should have batteries, torches, matches and more at home,” the county administrative board warned in a public statement.

Two large Swedish electric companies, Eon and Vattenfall, have also called in extra personnel and are preparing for the worst.

“Something is guaranteed to happen,” said Eon spokesperson Mattias Hennius to news agency TT. “A storm like this doesn’t go by without leaving a mark. Trees are going to fall over power lines and people are going to lose power.”

Winds in central Sweden, including Stockholm, are expected to be powerful but not unusually dangerous, reaching 24 metres per second during the night. At above 25 metres per second, winds constitute a severe storm, capable of ripping out trees by their roots.

By mid-afternoon on Monday, motor traffic over the Öresund Bridge was closed down due to high winds, SR reported.