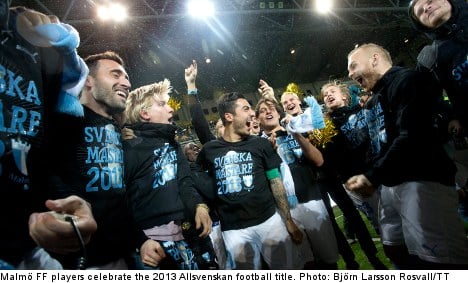 The win came following a dazzling two-goal performance by Guillermo Molins, who returned to Malmö in August after a disappointing sojourn with Anderlecht and Real Betis to help the club bring the Lennart Johansson trophy back to Sweden's third largest city.

"I knew we were going to win the title," he told the Expressen newspaper following the match.

Molins first found the net in the 36th minute after controlling a deep cross and racing into the penalty area before unleashing a thundering strike that scraped the crossbar as it sailed in the back of the goal.

IN PICTURES: See the fans storming the pitch

The 25-year-old, who first debuted for Malmö in 2006, struck again in the match's 70th minute, rounding a defender on the left side before deftly chipping over the Elsborg keeper at close range.

"I'm so glad to have won," Molins told broadcaster C More after the match.

"Rikard (Norling) believed in me when I came home, I got to play from the first minute. If you're a good player, it eventually shows," he added, referring to the Malmö coach, who took over the club in 2011, the year following their last Allsvenskan championship in 2010.

The title was Norling's first as head coach in Sweden's highest division, as he was an assistant with Stockholm club AIK when they won the Allsvenskan title back in 1998.

"I've loved coaching Malmö FF from day one. And I still do," he told Expressen, adding that he plans on returning as Malmö head coach next season.

The win even prompted a shout out from Zlatan Ibrahimovic, who began his professional career with Malmö back in 1999.

"I want to send a huge congratulations to MFF. Finally the gold is back home where it belongs," he said in a statement published on his Zlatan Unplugged app.

"The Allsvenskan gold is one of the few titles I lack."

Prior to the match, Malmö had its work cut out for it, as it needed to claim three points away at reigning champions Elfsborg's home arena in Borås at the same time as storm Simone was battering southwestern Sweden.

But thousands of Malmö supporters nevertheless braved the rough weather and made the journey north to cheer on their club.

With victory – and the club's 17th Allsvenskan title – assured in the game's waning minutes, Malmö fans couldn't contain their excitement, storming the pitch a few seconds before the end of the game after mistakenly thinking they heard the final whistle, causing a chaotic scene.

But the chaos morphed into unbridled celebration for both players and fans.

"We're not going to be watching movies on the bus ride home, that's for sure."