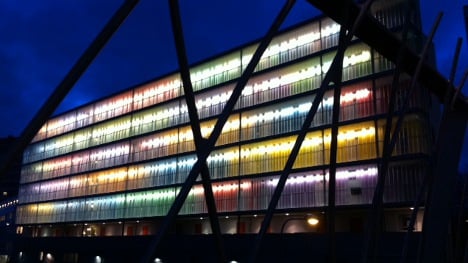 New housing in Stockholm neighbourhood Högdalen. File photo: Ann Törnkvist
A European Commission survey found that 96 percent of Stockholm residents reported being happy with life in the self-proclaimed "Capital of Scandinavia".
"I'm not surprised," Olle Zetterberg, head of city promotion organization Stockholm Business Region, told The Local. "It's a very clean city that's close to nature and we have a vibrant economy and labour market."
Despite Stockholm's high ranking, residents of Oslo and Copenhagen indicated they were slightly more satisfied with life in their respective cities – registering a 97-percent satisfaction rate. The happiest of them all, meanwhile, were residents of Aalborg in Denmark  – a whopping 99 percent said they were content with their urban existence.
Elsewhere in the report, which drew on responses from over 40,000 people across Europe, Stockholm topped the list of EU capitals when it came to shopping. Some 93 percent of Stockholmers said they were content with retail options in the city.
Stockholmers also appeared to be a trusting bunch, with a mighty 92 percent saying that people in their neighbourhood could be trusted. Only Danish cities Copenhagen and Aalborg scored higher.
Stockholm was also one of just four EU capital cities, along with Prague, Helsinki, and Bratislava, where people said it was easy to find a job, although the figure for Stockholm was only 53 percent. In non-EU capital Olso, in comparision, 70 percent of respondents said it was easy to find a job. Only five percent of people living in crisis-strewn Athens said the same.
And while 97 percent of Stockholm residents reported being satisfied with their own living situation and 90 percent with their financial well-being, housing remained an issue of concern for many who live in the Swedish capital.
"Housing is one area where there is certainly room for improvement," said Zetterberg.
Worrying about the housing situation greatly outweighed other issues such as public transport and healthcare, which was unusual in the survey. Stockholm was one of just seven cities where housing popped up so high on the list of concerns. Some 53 percent said it was the most important issue facing the city. In addition, 87 percent of Stockholm residents disagreed with claims that it was easy to find good housing at a reasonable price.
Zetterberg cited Stockholm's rent control system as well as complicated building laws that have slowed construction in recent years for the difficulties in finding a place to stay.
"It's a simple question of supply and demand. Demand is quite high and growing, and the housing supply can't catch up," he explained.
David Landes and Patrick Reilly