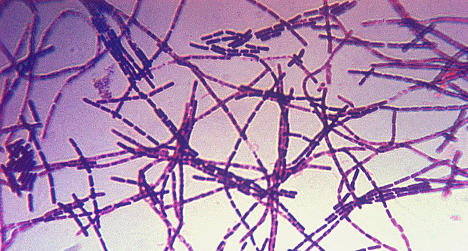 The dead cow was found on a farm in Örebro, central Sweden. The area was promptly cordoned off as the cadaver kept on bleeding. Blood that fails to coagulate is a typical clinical sign of the disease, Katharina Gielen, spokeswoman at the Swedish Agriculture Board (Jordbruksverket), told The Local.

"There's no indication as to why this cow had anthrax and we don't know where the bacteria came from," she said. "But there is nothing to indicate that there will be more cases."

So far, no one who has been in contact with the cow has contracted the disease.

The cow was found near an area where Sweden's last reported case of anthrax was reported in July 2011, but the agriculture board did not believe there was a connection. Over 50 other cattle nearby will be vaccinated on Saturday.

Anthrax, a bacterial disease that can be passed between animals and humans, is extremely potent and can live for 100 years, however no one has died in Sweden from anthrax since 1965.

The disease is most commonly contracted by herbivorous animals that are grazing and inhaling spores from infected environments. an be found worldwide, but not often in Sweden. Before 2011, the most recent reported case was in 2008 – prior to that, no case had been discovered since 1981.

Humans can be infected if they have close contact with animals who are dying of the disease, or have died, but it is extremely uncommon, especially in Sweden.

"Humans aren't that susceptible to catching anthrax from animals, there hasn't been a case for a long, long time," Gielen told The Local.