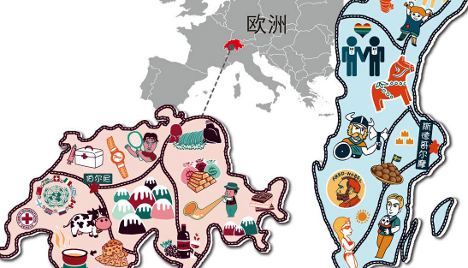 Photo courtesy of the Swedish consul general in Shanghai/TT

Swedes invented cheese with big holes and world-famous chocolate; the Swiss invented the adjustable spanner (not the monkey wrench, allegedly) and the ball bearing. Or did they… nope, while the Swedes have Västerbotten cheese and Marabou chocolate, neither are noteworthily recognized beyond Sweden's borders.

The Anglophones have it relatively easy – Sweden and Switzerland – while Spanish-speakers may struggle with the Suecia v Suiza conundrum. That also holds true for the Chinese, for whom the two European countries' names sound a wee bit too close for comfort.

"You often encounter this," Swedish Consul General Victoria Li told the TT news agency. "Sweden is 'Ruidian' and Switzerland is 'Ruishi'. The first symbol is the same."

To tackle the name mixup, she has launched a competition on social media, inviting people to come up with funny ways to keep the two countries apart.

The poster for the competition, which is open until November 20th, is choc-a-bloc with objects and people associated with the two countries. The Swedish map has a Dalecarlian horse, of course, and then a smörgåsbord selection of men – five in all: A viking, two gay men getting married, Alfred Nobel, and finally a guy on parental leave with a bairn strapped to his chest. Astrid Lindgren's flame-haired rebel child Pippi Långstocking gets a look-in too.

The rather lacklustre gallery of people on the map of Switzerland might shed some light on Swedish ignorance of the Swiss, meanwhile, but that's a different story. At least tennis ace Roger Federer gets a look-in.

And talking about sports stars, let's not forget that table-tennis champ J-O Waldner is a Chinese house god.

"He's a superstar over there, dubbed 'the eternally green tree' or something," said Swedish designer Anna Forsberg who used to live in Beijing and Kunming.

"I was actually quite surprised by how well acquainted people in China were with Sweden," she said. "Although of course maybe you without knowing it fed people prompt words like Volvo if they didn't seem to pick up on the country name in conversation."

Once the Swiss-Swedish competition wraps up in China, the winner will be shipped off on holiday to both destinations. But they'll have to report back on their impressions.