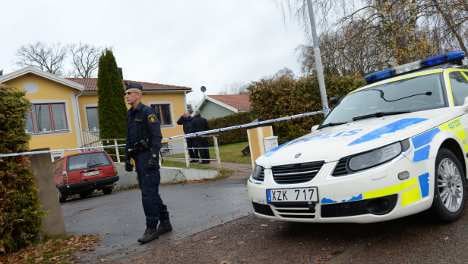 Photo: Jonas Ekströmer/Scanpix
A further man was injured in the killing spree.
The 33-year-old has been arrested on probable cause for the two deaths, according to a details released in a news conference at police headquarters in nearby Linköping on Saturday afternoon.
"The evidence suggests that there is a person who is feeling unwell, a form of mental illness," Jan Staaf, the officer leading the investigation, said.
Police were alerted to the area at around 2am on Saturday after reports of  "shouting and screaming" in the street. A woman called the police to say that a man was in her basement, in the company of two teenage boys. The man is thought to have left one of the boys behind, taking the other with him as he left the cellar.
A woman and a man in the vicinity responded to the commotion and went to investigate. A fight ensued, and the boy and woman were killed. The man was left nursing injuries.
"It seems that she may have fallen victim to the perpetrator as she tried to protect the boy," press spokesman Thomas Agnevik told the Expressen daily.
The man was arrested not far from the scene of the suspected double murder. Police confirmed that the suspect is a known offender.
A preliminary hearing has been held, but police would not go into what was said or how the man has responded to the suspicions against him.
.
"Both the suspect and some of the victims have been traumatized. We are taking one thing at a time and will talk to the suspect in due course," Jan Staaf said.
Staaf confirmed that there are around 100 officers in Linköping working on the case.